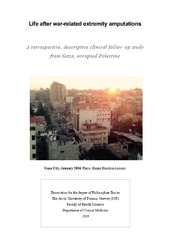 Little is known about medical consequences of losing arm(s) or leg(s) in military attacks. Many Palestinians in Gaza have suffered loss of one or more limbs during recurrent Israeli military incursions. Such serious physical trauma pose grave health problems not only for the amputee, but also for their families and for the society at large. The problem is increasing. Hanne Heszlein-Lossius, MD, from UiT The Arctic University of Tromsø has together with her supervisor professor Mads Gilbert (UiT) and Palestinian research colleagues in Gaza conducted a study of 254 patients with war-related traumatic extremity amputations in Gaza. The patients attended Gaza’s main rehabilitation center, The Artificial Limb and Polio Centre (ALPC) in Gaza City for prosthesis and rehabilitation. The studies, published in The Lancet, BMJ and BMC found that the majority of the amputated Palestinians were young, well-educated men with large financial responsibilities, and often the family’s sole breadwinner. Most traumatic amputations were major and will cause life-long disability. To lose the ability to work and thus loose income and the ability to care for one’s family and put food on the table seemed to be an important trauma adding to the pain and loss of arms or legs. A variety of military weapons had caused the loss of limb(s) among the studied patients. Unarmed military airplanes carrying explosive weapons (drones) were the most common. Those who had been hit during drone-attacks suffered the most severe extremity amputations. The patients needed more surgical operations after drone strikes than amputations caused by other weapons.