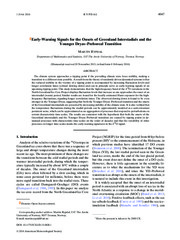 The climate system approaches a tipping point if the prevailing climate state loses stability, making a transition to a different state possible. A result from the theory of randomly driven dynamical systems is that the reduced stability in the vicinity of a tipping point is accompanied by increasing fluctuation levels and longer correlation times (critical slowing down) and can in principle serve as early-warning signals of an upcoming tipping point. This study demonstrates that the high-frequency band of the δ18O variations in the North Greenland Ice Core Project displays fluctuation levels that increase as one approaches the onset of an interstadial (warm) period. Similar results are found for the locally estimated Hurst exponent for the high-frequency fluctuations, signaling longer correlation times. The observed slowing down is found to be even stronger in the Younger Dryas, suggesting that both the Younger Dryas–Preboreal transition and the onsets of the Greenland interstadials are preceded by decreasing stability of the climate state. It is also verified that the temperature fluctuations during the stadial periods can be approximately modeled as a scale-invariant persistent noise, which can be approximated as an aggregation of processes that respond to perturbations on certain characteristic time scales. The results are consistent with the hypothesis that both the onsets of the Greenland interstadials and the Younger Dryas–Preboreal transition are caused by tipping points in dynamical processes with characteristic time scales on the order of decades and that the variability of other processes on longer time scales masks the early-warning signatures in the δ18O signal.

Source: Journal of Climate
doi: 10.4236/am.2016.715143
© 2016 American Meteorological Society (AMS). Permission to use figures, tables, and brief excerpts from this work in scientific and educational works is hereby granted provided that the source is acknowledged. Any use of material in this work that is determined to be “fair use” under Section 107 of the U.S. Copyright Act September 2010 Page 2 or that satisfies the conditions specified in Section 108 of the U.S. Copyright Act (17 USC §108, as revised by P.L. 94-553) does not require the AMS’s permission. Republication, systematic reproduction, posting in electronic form, such as on a website or in a searchable database, or other uses of this material, except as exempted by the above statement, requires written permission or a license from the AMS.