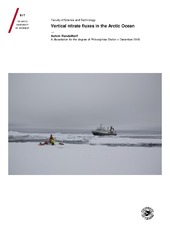 Upward mixing of remineralized nutrients is essential for photosynthesis in the upper ocean. Weak vertical mixing, which restricts nutrient supply, and sea ice, which leads to low light levels, conspire to severely inhibit marine primary productivity in the Arctic Ocean. However, little has been known about their relative contributions. No large-scale quantitative estimates of the vertical nutrient supply had previously been presented, which has impeded an understanding of its role in shaping the ecology and carbon cycle of the Arctic Ocean. In order to estimate the vertical flux of nitrate into the surface layer in contrasting hydrographic and dynamic regimes, profiles of turbulent microstructure and nitrate concentrations were measured as part of a number of cruises and ice camps in the area extending from eastern Fram Strait into the Nansen Basin. These have been supplemented with obervations of the seasonal nutrient cycle at a mooring in the same area, and a reanalysis of available data on nitrate concentrations and turbulent mixing in other parts of the central Arctic Ocean. Hydrography was found to be the biggest driver of variability in nitrate fluxes. Strong stratification, wherever encountered, restricted nitrate supply, often in concert with concurrently weak turbulent mixing, both in the seasonal nitracline (0.3–0.7 mmol N m-2 d-1) and the deep basin (0.01–0.2 mmol N m-2 d-1). Thus deep winter mixing supplies the bulk of the nitrate pool on the relatively productive shelves (e.g. 2.5 mmol N m-2 d-1 in the inflow of Atlantic Water during winter), but in the strongly stratified Canadian Basin, fluxes are low year-round (on the order of 0.01 mmol N m-2 d-1) and place a tight limit on new production. Only the weakly stratified Atlantic derived water in the Nansen Basin close to Fram Strait seems to have a certain potential to support future increases in new production under a seasonal ice cover.

The paper III of this thesis is not available in Munin.
Paper III: Randelhoff, A., Fer, I., Sundfjord, A.: “Turbulent upper-ocean mixing affected by meltwater layers during Arctic summer”. (Manuscript). Published version available in J. Phys. Oceanogr. 2017, 47:835–853.