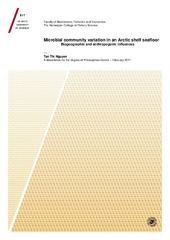 Studying the spatial patterns of microbial diversity is crucial in order to assess the relationship between community structure and ecosystem function. However, due to methodological limitations in the past, relatively little has been known about the biogeography of microbial communities. The introduction of next generation sequencing technologies from 2005 was a game changer, as DNA sequencing suddenly became relatively fast and cost-effective. The application of next generation sequencing in microbial ecology has revealed non-random patterns of microbial diversity in a variety of habitats. The main objective of this thesis was to assess how microbial communities were distributed in an Arctic shelf seafloor across geographic separation and anthropogenic impact by using next generation sequencing approaches. To assess spatial variations of bacterial, archaeal, and viral communities, and possible coincidences in their biogeographical patterns, surface sediment samples were collected along a 640 km Barents Sea transect. Previous findings were confirmed and extended in the explored marine sediments, as Deltaproteobacteria and Gammaproteobacteria were dominant bacterial classes, while Thaumarchaeota were predominant among the archaeal groups. The viral assemblages appeared dominated by single-stranded DNA (ssDNA) viruses, mostly of the Eukaryotic Circular Rep-encoding ssDNA (CRESS-DNA) group, which include the families Circo-, Nano-, and Germiniviridae. However, the high representation of ssDNA viruses was likely a consequence of amplification bias caused by the use of multiple displacement DNA amplification of the viral preparations. Although stability in higher taxa composition across geographical distances, were expected due to moderate environmental variations in the sampling area, significant distance-decay of both bacterial and archaeal communities in the Barents Sea seafloor was observed. Beta-diversity analyses of prokaryotes and viruses showed some degree of community structuring in accordance with the south-north spatial separation. While archaeal communities appeared largely influenced by environmental factors, bacterial communities seemed structured by a relatively equal contribution from environmental and spatial factors. The viral grouping into a southern and a northern region was principally associated with changes in the relative abundance and composition of eukaryotic ssDNA viruses. To determine whether offshore drilling waste, i.e discharge of rock cuttings and drilling muds, could cause changes in the bacterial communities, sediment corer samples were collected at variable distances from a newly drilled well. The results showed that the bacterial community compositions in the uppermost sediment layer close to the drilling site was significantly different from those of unaffected areas. The bacterial groups most conspicuously associated with the community change were representatives of the orders Clostridia and Desulfuromonadales and the class Mollicutes. These are candidates as microbial bioindicators of the spatial extent and persistence of drilling waste discharge. The effects of drilling waste discharges on bacterial composition were observable in 100 m radius around the well. The drilling waste caused oxygen depletion in the upper sediment layer in close proximity to offshore drilling site.