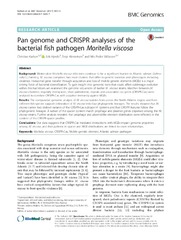 Results: The comparative genomic analysis of M. viscosa isolates from across the North Atlantic region and from different fish species support delineation of M. viscosa into four phylogenetic lineages. The results showed that M. viscosa carries two distinct variants of the CRISPR-Cas subtype I-F systems and that CRISPR features follow the phylogenetic lineages. A subset of the spacer content match prophage and plasmid genes dispersed among the M. viscosa strains. Further analysis revealed that prophage and plasmid-like element distribution were reflected in the content of the CRISPR-spacer profiles.

Conclusions: Our data suggests that CRISPR-Cas mediated interactions with MGEs impact genome properties among M. viscosa, and that patterns in spacer and MGE distributions are linked to strain relationships.