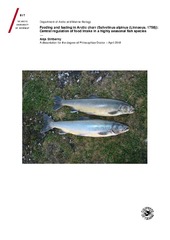 Central control mechanisms of food intake vary between different fish species. Few studies have investigated the role of central appetite regulators in fish species that show natural seasonal variations in food intake. Yet, seasonal fishes are particularly interesting because their potential seasonally sliding set-points in appetite and energy homeostasis may reveal new information about the long-term control of food intake in fish. Arctic charr inhabit the oligotrophic freshwater systems of the North. The anadromous (sea-migrating) charr cope with the poor nutritional conditions found in fresh water by performing short feeding migrations to the nutrient-rich sea for a few weeks in summer. These charr obtain their nutrients almost entirely from marine food resources and feed little or nothing while residing in fresh water during the rest of the year. The seasonal feeding rhythm is considered to be under tight endogenous control because it is sustained in captive offspring of anadromous charr despite year-round feed access. The mechanisms underlying the seasonal feeding behaviour of the charr are not understood.
In this work we aimed at shedding light on the role of central appetite regulators in the control of appetite in Arctic charr. We measured the gene expression of putative appetite regulators in captive immature offspring of anadromous Arctic charr held at a simulated natural conditions, as well as in Arctic charr that were subjected to a short and a long period of feed deprivation. In addition we tested the effects of re-feeding and fish feed flavour on the expression of hypothalamic appetite regulators in previously long-term feed deprived charr. Lastly, we compared the brain transcriptome between fed and feed deprived charr over a four weeks period during summer in order to assess effects of feed deprivation on a larger scale.
Our data indicate that the reduction and increase in appetite during winter and summer, respectively, are not regulated by changes in central satiety and hunger signalling in the charr. Furthermore, we could not find differences in central appetite signalling between long-term energy perturbed and fed charr during summer. We conclude from these findings, that the charr may enter a steady-state like regulation of appetite when feed is present or absent for a longer period of time. However, the re-feeding or feed flavour presentation evoked responses in some appetite regulating genes. Consequently, we suggest that changes in the expression of central appetite regulators may only be seen during transition phases, from fasting to feeding, and vice versa, in the Arctic charr. The transcriptomic approach revealed two new interesting candidate genes, nerve growth-factor inducible (VGF) and deiodinase 2 (Dio2), which are previously described to participate in the regulation of energy homeostasis in seasonal mammals. As such this work expands current knowledge about the role of known appetite regulators and depicts new aspects that may be linked to the food intake control of seasonal fishes.