Modeled deposition of nitrogen and sulfur in Europe estimated by 14 air quality model systems: evaluation, effects of changes in emissions and implications for habitat protection 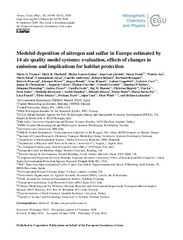 The evaluation and intercomparison of air quality models is key to reducing model errors and uncertainty. The projects AQMEII3 and EURODELTA-Trends, in the framework of the Task Force on Hemispheric Transport of Air Pollutants and the Task Force on Measurements and Modelling, respectively (both task forces under the UNECE Convention on the Long Range Transport of Air Pollution, LTRAP), have brought together various regional air quality models to analyze their performance in terms of air concentrations and wet deposition, as well as to address other specific objectives.

This paper jointly examines the results from both project communities by intercomparing and evaluating the deposition estimates of reduced and oxidized nitrogen (N) and sulfur (S) in Europe simulated by 14 air quality model systems for the year 2010. An accurate estimate of deposition is key to an accurate simulation of atmospheric concentrations. In addition, deposition fluxes are increasingly being used to estimate ecological impacts. It is therefore important to know by how much model results differ and how well they agree with observed values, at least when comparison with observations is possible, such as in the case of wet deposition.

This study reveals a large variability between the wet deposition estimates of the models, with some performing acceptably (according to previously defined criteria) and others underestimating wet deposition rates. For dry deposition, there are also considerable differences between the model estimates. An ensemble of the models with the best performance for N wet deposition was made and used to explore the implications of N deposition in the conservation of protected European habitats. Exceedances of empirical critical loads were calculated for the most common habitats at a resolution of 100 × 100m2 within the Natura 2000 network, and the habitats with the largest areas showing exceedances are determined.

Moreover, simulations with reduced emissions in selected source areas indicated a fairly linear relationship between reductions in emissions and changes in the deposition rates of N and S. An approximate 20% reduction in N and S deposition in Europe is found when emissions at a global scale are reduced by the same amount. European emissions are by far the main contributor to deposition in Europe, whereas the reduction in deposition due to a decrease in emissions in North America is very small and confined to the western part of the domain. Reductions in European emissions led to substantial decreases in the protected habitat areas with critical load exceedances (halving the exceeded area for certain habitats), whereas no change was found, on average, when reducing North American emissions in terms of average values per habitat.