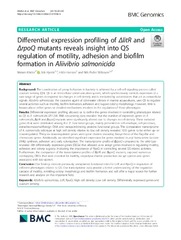 Background: The coordination of group behaviors in bacteria is achieved by a cell-cell signaling process called quorum sensing (QS). QS is an intercellular communication system, which synchronously controls expression of a vast range of genes in response to changes in cell density and is mediated by autoinducers that act as extracellular signals. Aliivibrio salmonicida, the causative agent of cold-water vibrosis in marine aquacultures, uses QS to regulate several activities such as motility, biofilm formation, adhesion and rugose colony morphology. However, little is known about either genes or detailed mechanisms involved in the regulation of these phenotypes.

Results: Differential expression profiling allowed us to define the genes involved in controlling phenotypes related to QS in A. salmonicida LFI1238. RNA sequencing data revealed that the number of expressed genes in A. salmonicida, ΔlitR and ΔrpoQ mutants were significantly altered due to changes in cell density. These included genes that were distributed among the 21 functional groups, mainly presented in cell envelope, cell processes, extrachromosomal/foreign DNA and transport-binding proteins functional groups. The comparative transcriptome of A. salmonicida wild-type at high cell density relative to low cell density revealed 1013 genes to be either up- or downregulated. Thirty-six downregulated genes were gene clusters encoding biosynthesis of the flagellar and chemotaxis genes. Additionally we identified significant expression for genes involved in acyl homoserine lactone (AHL) synthesis, adhesion and early colonization. The transcriptome profile of ΔrpoQ compared to the wild-type revealed 384 differensially expressed genes (DEGs) that allowed us to assign genes involved in regulating motility, adhesion and colony rugosity. Indicating the importance of RpoQ in controlling several QS related activities. Furthermore, the comparison of the transcriptome profiles of ΔlitR and ΔrpoQ mutants, exposed numerous overlapping DEGs that were essential for motility, exopolysaccharide production via syp operon and genes associated with tad operon.

Conclusion: Our findings indicate previously unexplained functional roles for LitR and RpoQ in regulation of different phenotypes related to QS. Our transcriptome data provide a better understanding of the regulation cascade of motility, wrinkling colony morphology and biofilm formation and will offer a major source for further research and analysis on this important field.