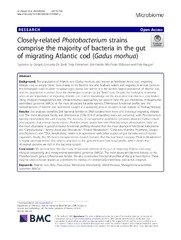 Background - The population of Atlantic cod (Gadus morhua), also known as Northeast Arctic cod, migrating Atlantic cod, or simply “skrei,” lives mainly in the Barents Sea and Svalbard waters and migrates in annual cycles to the Norwegian coast in order to spawn eggs during late winter. It is the world’s largest population of Atlantic cod, and the population is distinct from the Norwegian coastal cod (or “fjord” cod). Despite the biological, economic, and cultural importance of migrating Atlantic cod, current knowledge on the associated microbiota is very limited. Using shotgun metagenomics and metaproteomics approaches, we present here the gut microbiota, metagenome-assembled genomes (MAGs) of the most abundant bacterial species, DNA-based functional profile, and the metaproteome of Atlantic cod specimens caught at a spawning area in an open ocean outside of Tromsø, Norway.

Results - Our analyses identified 268 bacterial families in DNA isolated from feces of 6 individual migrating Atlantic cod. The most abundant family was Vibrionaceae (52%; 83% if unclassified reads are excluded), with Photobacterium (genus) representing the vast majority. The recovery of metagenome-assembled genomes provided further details and suggests that several closely related Photobacterium strains from the Photobacterium phosphoreum clade are the most abundant. A genomic-based functional profiling showed that the most abundant functional subsystems are “Carbohydrates”; “Amino Acids and Derivatives”; “Protein Metabolism”; “Cofactors, Vitamins, Prosthetic, Groups, and Pigments”; and “DNA Metabolism,” which is in agreement with other studies of gut microbiomes of marine organisms. Finally, the MS-based metaproteomic dataset revealed that the functional category “Protein Metabolism” is highly overrepresented (3×) when compared to the genome-based functional profile, which shows that ribosomal proteins are rich in the bacterial cytosol.

Conclusion - We present here the first study of bacterial diversity of the gut of migrating Atlantic cod using shotgun sequencing and metagenome-assembled genomes (MAGs). The most abundant bacteria belong to the Photobacterium genus (Vibrionaceae family). We also constructed functional profiles of the gut microbiome. These may be used in future studies as a platform for mining of commercially interesting cold-active enzymes.