Geochemistry of sediment-hosted copper deposits and their environmental impact: A case study from the Nussir and Ulveryggen deposits, Repparfjord Tectonic Window, Northern Norway 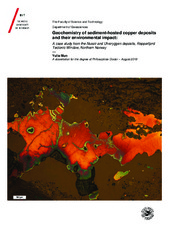 Modern growing economy and technology require metals. Therefore mining is an unavoidable process. Mining in its turn results in the production of large amounts of mine waste. This research is focused on one type of mine waste, mine tailings, formed after the processing of Cu-sulphides deposits. Acid mine drainage (AMD) is a consequence of the oxidation of sulphide-rich rocks and has a drastic impact on the environment. In order to better understand the factors that can influence the rate of sulphides oxidation, a thorough investigation of primary ore and petrographic, mineralogical and geochemical characterization of host rocks was made on two sedimentary-hosted Cu deposits of Nussir and Ulveryggen in northern Norway. The exploitation of the Ulveryggen deposit in 1972-1978/79 resulted in mine tailings disposal in Repparfjorden. Mineralogical and geochemical investigation of marine sediments revealed that in spite of the fact that sulphides are generally well-preserved, some signs of AMD are present. To compare the submarine conditions of mine tailings disposal with on-land deposition, the Røros mining area, in Trøndelag, was chosen as a case study. Thermodynamical modeling was applied for determination of dissolved Cu speciation under the varying pH. The redox potential (Eh) is the major factor that influences the sulphides solubility while pH determines the dissolved species. In anoxic submarine conditions, the sulphides remain well-preserved, while in oxic atmospheric conditions, the strong weathering occurs. Laboratory weathering tests were conducted during 90-days period to simulate the oxidation of sulphides in the submarine and on-land conditions. Carbonates and/or organic matter were added to marine sediments or quarzitic sand and infiltrated with seaweater or meteoric freshwater. The results demonstrated that organic matter prevents oxidation while carbonates trigger the Cu-sulphides weathering.