The speciation landscape of European whitefish in Northern Fennoscandia – the importance of deglaciation history, standing genetic variation and natural selection 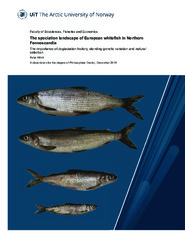 thesis.pdf (3.882Mb)
Thesis introduction, Paper I and III (PDF)
thesis_entire.pdf (5.795Mb)
Entire thesis in one comprehensive file (PDF)
File(s) with restricted access are under embargo until 2021-12-10

During the last deglaciation, one clade of European whitefish (Coregonus lavaretus L.) colonized the lakes in the three contemporary watercourses of northern Fennoscandia (Pasvik, Tana and Alta) and diverged thereafter in sympatry. This thesis investigates the interplay between evolutionary processes and standing genetic variation in shaping phenotypic and genetic divergence, and how reproductive isolation is established and maintained in whitefish. In this thesis, I demonstrated how selection has shaped the whitefish population across a large spatial scale despite the clear effect of random genetic drift - presumably arising from the colonization history. The diversification of European whitefish follows a (non)parallel trajectory, as morphs in the different watercourses were characterised with various levels of phenotypic and genetic divergence, and signatures of both within and between lakes divergence were observed in all studies conducted within this thesis.

As the reproductive isolation between whitefish eco-morph is not complete, hybridisation between morphs occurs frequently, which may refer relatively weak postzygotic barriers to gene flow between morphs. When whitefish morphs adapt to a specific niche, they encounter different environment conditions, like water temperature and prey availability that are important factors determining size at sexual maturity, somatic growth, and gonad development. Consequently, allochrony together with spatial differences in spawning may reinforces the ecological divergence and help to build up barriers to gene flow between the whitefish morphs. Indeed, allochrony seems to be working towards stronger reproductive isolation, as the advancement of the maturity, as well as the proportion of mature individuals differed between morphs.

The results of this thesis are in line with the theory of ecological speciation and show how selection has shaped the European whitefish morphs towards stronger phenotype-environment correlation and more diversified populations, despite the decreasing amount of standing genetic variation between the three contemporary watercourses. Thus, the occurrence of whitefish morphs in the three watercourses may be an outcome of convergent evolution, where similar phenotypes have arisen from different genetic backgrounds.