Aliivibrio wodanis as a production host: development of genetic tools for expression of cold-active enzymes 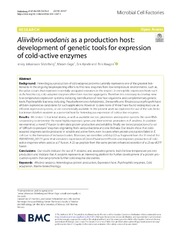 Background: Heterologous production of cold-adapted proteins currently represents one of the greatest bottlenecks in the ongoing bioprospecting eforts to fnd new enzymes from low-temperature environments, such as, the polar oceans that represent essentially untapped resources in this respect. In mesophilic expression hosts such as Escherichia coli, cold-adapted enzymes often form inactive aggregates. Therefore it is necessary to develop new low-temperature expression systems, including identifcation of new host organisms and complementary genetic tools. Psychrophilic bacteria, including Pseudoalteromonas haloplanktis, Shewanella and Rhodococcus erythropolis have all been explored as candidates for such applications. However to date none of these have found widespread use as efcient expression systems, or are commercially available. In the present work we explored the use of the sub-Arctic bacterium Aliivibrio wodanis as a potential host for heterologous expression of cold-active enzymes.

Results: We tested 12 bacterial strains, as well as available vectors, promoters and reporter systems. We used RNAsequencing to determine the most highly expressed genes and their intrinsic promoters in A. wodanis. In addition we examined a novel 5′-fusion to stimulate protein production and solubility. Finally we tested production of a set of “difcult-to-produce” enzymes originating from various bacteria and one Archaea. Our results show that coldadapted enzymes can be produced in soluble and active form, even in cases when protein production failed in E. coli due to the formation of inclusion bodies. Moreover, we identifed a 60-bp/20-aa fragment from the 5′-end of the AW0309160_00174 gene that stimulates expression of Green Fluorescent Protein and improves production of coldactive enzymes when used as a 5′-fusion. A 25-aa peptide from the same protein enhanced secretion of a 25-aa-sfGFP fusion.