Vibrionaceae core, shell and cloud genes are non-randomly distributed on Chr 1: An hypothesis that links the genomic location of genes with their intracellular placement 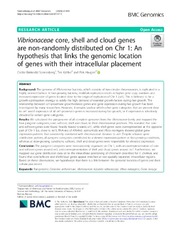 Background - The genome of Vibrionaceae bacteria, which consists of two circular chromosomes, is replicated in a highly ordered fashion. In fast-growing bacteria, multifork replication results in higher gene copy numbers and increased expression of genes located close to the origin of replication of Chr 1 (ori1). This is believed to be a growth optimization strategy to satisfy the high demand of essential growth factors during fast growth. The relationship between ori1-proximate growth-related genes and gene expression during fast growth has been investigated by many researchers. However, it remains unclear which other gene categories that are present close to ori1 and if expression of all ori1-proximate genes is increased during fast growth, or if expression is selectively elevated for certain gene categories.

Results - We calculated the pangenome of all complete genomes from the Vibrionaceae family and mapped the four pangene categories, core, softcore, shell and cloud, to their chromosomal positions. This revealed that core and softcore genes were found heavily biased towards ori1, while shell genes were overrepresented at the opposite part of Chr 1 (i.e., close to ter1). RNA-seq of Aliivibrio salmonicida and Vibrio natriegens showed global gene expression patterns that consistently correlated with chromosomal distance to ori1. Despite a biased gene distribution pattern, all pangene categories contributed to a skewed expression pattern at fast-growing conditions, whereas at slow-growing conditions, softcore, shell and cloud genes were responsible for elevated expression.

Conclusion - The pangene categories were non-randomly organized on Chr 1, with an overrepresentation of core and softcore genes around ori1, and overrepresentation of shell and cloud genes around ter1. Furthermore, we mapped our gene distribution data on to the intracellular positioning of chromatin described for V. cholerae, and found that core/softcore and shell/cloud genes appear enriched at two spatially separated intracellular regions. Based on these observations, we hypothesize that there is a link between the genomic location of genes and their cellular placement.

Haugen P. Vibrionaceae core, shell and cloud genes are non-randomly distributed on Chr 1: An hypothesis that links the genomic location of genes with their intracellular placement. BMC Genomics. 2020;21(1):625