Human impact on highly mobile cetaceans: the use of biotelemetry data to inform ocean management 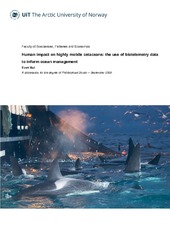 The human presence in the worlds’ oceans is increasing, in response to the growing demand for marine resources. This expansion of human activities will increase pressure on marine ecosystems and demands a responsible ocean management, to ensure the sustainable use of marine resources. Highly mobile marine top predators, such as cetaceans (whales, dolphins and porpoises) are exposed to a multitude of anthropogenic activities, as they frequent various habitats. This highlights the need to evaluate the cumulative impacts of multiple human activities on these species. However, studying these animals can be challenging, as they spend most of their time under water and travel over long distances, often in remote offshore regions. In this thesis, biotelemetry data is used to assess the influence of human activities on two marine top predators in the Norwegian and Barents Sea, humpback whales and killer whales. Humpback whales are seasonal migrants in the study area, primarily in the Barents Sea, and transit through the coastal regions of northern Norway. In contrast, killer whales reside in Norwegian waters throughout the year, often in coastal regions where the concentration of human pressure is high. This difference in life strategy is likely to influence how these species overlap and interact with human activities.

Biotelemetry is recognised as a valuable tool in the analysis of animal behaviour. To evaluate how this tool can be used to study human impact, 41 killer whales (Orcinus orca) and 30 humpback whales (Megaptera novaeangliae) were tagged with Argos satellite devices between 2014 and 2019 in the Norwegian and Barents Sea. As both species are associated with winter herring aggregations in the fjords of northern Norway, most of the tags were deployed during the herring overwintering. In addition, some humpback whales were instrumented during the late summer in the Barents Sea, and some killer whales were instrumented during the spring off the coast of western Norway. Since Argos tags can only transmit data when they are above the surface, tag placement on the animal might influence the quality and the quantity of location estimates. To test the influence of tag placement, two tags were deployed at different heights on the dorsal fin of a single killer whale. The tag that was placed higher up the dorsal fin generated more and higher quality location estimates. This could influence the results and conclusions of biotelemetry studies, in terms of area usage and association with specific oceanographic or anthropogenic features. For example, we found that correlations to environmental characteristics can either be missed or falsely identified at a spatial resolution of less than a few kilometres. These results demonstrate that tag placement should be considered when interpreting biotelemetry data, in particular when comparing the movement of multiple individuals. Alternatively, increasing the spatial resolution of the analysis can reduce the influence of tag placements on the interpretation of biotelemetry studies.

In the final step of this thesis, all the data were combined, in order to develop and test a new framework for dynamic cumulative impact assessment for highly migratory top predators. This framework was tested on humpback and killer whales in the Norwegian and Barents Sea, by evaluating all the major human activities and by calculating a cumulative impact index. We found that areas of high impact were strongly influenced by seasonal variations in the distribution of cetaceans. In this case study, we identified an area of high impact in the northern Barents Sea during the summer. Here, foraging humpback whales overlapped with shipping and fishing activities. During the autumn, winter and spring, high impact areas were identified primarily along the coast of northern Norway. Between winter and spring, a clear southwards shift can be recognised in the high impact area, which appears to coincide with the migration of Norwegian Spring Spawning herring (Clupea harengus). The concentration of human activities in this area is generally higher than in the Barents Sea, which demonstrates that humpback whales are exposed to various intensities of anthropogenic activities, while killer whales are exposed to high intensities throughout the year. Although the distribution of human activities also varies throughout the year, in this study, animal distribution appeared to be the main factor influencing the areas of high impact. With this study, we have demonstrated that this framework can be used to identify areas of high cumulative impact and that seasonal variation in animal distribution should be considered in cumulative impact assessments for highly mobile top predators. Biotelemetry data provides a powerful input for a dynamic cumulative impact assessment, in particular if animal data can be collected throughout the year.

Cumulative impact assessments require knowledge on detailed animal responses to individual anthropogenic activities. Unfortunately, this knowledge is often lacking, which indicates the need for biotelemetry studies that focus on the interaction between a species and a human activity. The proposed framework for dynamic cumulative impact assessments is suitable to evaluate how multiple anthropogenic activities affect highly mobile marine top predators along their migration routes. This approach can identify dynamic areas of high cumulative overlap that may require conservation priority. Future studies can build on this framework to develop dynamic cumulative impact assessments for other species or ecosystems. Especially considering climatic and anthropogenic changes in the Arctic in the near future, there is a strong need for evaluation on human impacts on species, ecosystems and habitats, including highly mobile marine predators.