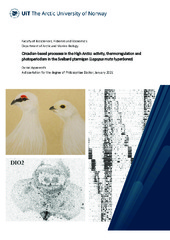 This thesis addresses aspects of the circadian and photoperiodic system in a High Arctic bird: the Svalbard ptarmigan (Lagopus muta hyperborea, Sundevall 1845). The most northern resident bird inhabits a unique photic environment; 2/3 of its year it spends either under a night without sunrise (polar night) or under a never setting Sun (polar day). Studies so far suggest a temporal loss of circadian control over behaviour during these constant photic conditions, allowing opportunistic rather than circadian dictated behaviour. Yet, circadian control extends beyond temporal organisation of behaviour, and other aspects of this Arctic-adapted circadian machinery have received less attention.

Rhythms in core body temperature (Tb) have not been thoroughly studied in Svalbard ptarmigan and in Arctic birds in general and the extent of circadian control over this physiological parameter is unknown. In paper I, we have investigated the Tb rhythm alongside activity in captive Svalbard ptarmigan under short photoperiod (SP), long photoperiod (LP) as well as under constant light (LL) and constant darkness (DD). While birds under SP and LP showed clear diurnal activity and Tb patterns, these rhythms seemed to be lost under LL and DD. However, under SP we noticed nocturnal rise in Tb in anticipation to the light-on signal, a rise which also preceded rise in activity. Anticipation is a hallmark of circadian rhythmicity and indicates circadian control of thermoregulation in Svalbard ptarmigan.

While Tb and activity might be useful parameters to characterise circadian organisation, the primary importance of circadian rhythms in the Arctic might not be found in behavioural and physiological synchronisation over the 24-h timescale. Photoperiodism describes the mechanism by which organisms receive and respond to changes in day length (photoperiod) in order to achieve synchrony with a seasonal environment. This process is theorised to be based on circadian rhythmicity at least in mammals and birds. In the weak daily rhythmicity but strong seasonal rhythmicity of the High Arctic, the true importance of circadian rhythms might, therefore, lie in its participation in photoperiodism rather than in daily organisation of behaviour and physiology.

In order to explore whether photoperiodism is circadian-based within Arctic animals, we have studied the neuroendocrine centre for photoperiodic responses: the mediobasal hypothalamus (MBH) and the adjacent pars tuberalis (PT) in captive Svalbard ptarmigan under various photoperiodic treatments. In paper II, we established that processes within the MBH and PT of an Arctic animal are identical to temperate species. We also showed that a photoperiodic response in the MBH, PT and in gonadal maturation can take place when birds are transferred directly from DD to LL, i.e. without light-mediated entrainment and despite behavioural arrhythmicity in both conditions. This suggests that the rhythm necessary for photoperiodic induction was either sustained or rapidly initiated under these conditions.

The sum of these studies show that Svalbard ptarmigan are able to escape circadian hegemony in behaviour and thermoregulation under arrhythmic conditions but are able to produce rhythm-based photoperiodic responses under various experimental light schedules. This establishes the importance of circadian rhythms in the Arctic as basis for seasonal responses.