Photoperiodic history-dependent preadaptation of the smolting gill. Novel players and SW immediate response as markers of growth and welfare 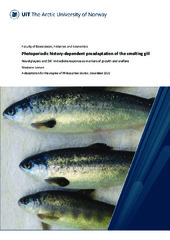 This thesis presents a rich introduction to the evolution, life history and physiology of Atlantic salmon, with a special emphasis on the developmental transitions (termed smolting) juvenile salmon pass through has they prepare to migrate from their native freshwater habitat to the sea. The introduction provides a comprehensive background on chronobiology and osmoregulation in fishes and links this to the process of smolting as it has been described in literature. Further, this thesis contributes three papers to the standing literature on Atlantic salmon, salmonids and smolting. Paper I focuses on the role of photoperiod history for smolting and pre-adaptation to saltwater to occur in a coordinated and organized manner, and presents results showing photoperiod history ultimately influences saltwater growth. The paper presents data on previously unstudied genes in the context of salmonids and pre-adaptation to saltwater indicating that they could be important for predicting SW-tolerance in juvenile salmon. Paper II further illustrates the importance of photoperiod stimuli to drive smolting and preadaptation to saltwater. The data presented in paper II show clear differences in the response to saltwater between different photoperiod treatments. Not only in the number of responsive genes but also in the group of genes whose expression was influenced by saltwater exposure. Saltwater-responsive genes in the two treatments designed not to bring forth a saltwater-adapted juvenile were enriched for promoter motifs linked with a general stress response and osmoregulatory stress. The third paper focused on the temporal and spatial expression of the so-called clock genes in salmon, also smolting. One of the main findings of this paper is that many clock genes derived from the fourth salmon specific whole genome duplication have tissue-specific expression profiles, and that their regulation in the gill correlates with smolting. The main findings of these papers are presented and discussed together with insights from literature and unpublished data derived from the same datasets presented in the papers.

The transcriptomics data set used for this thesis is available at the ArrayExpress depository, with accession number E-MTAB-8276.