Millennial-scale variability of Atlantic water inflow in the northern Nordic Seas and the northwestern Barents Sea - Relationship to abrupt climate oscillations, cryosphere and methane seepage from the seafloor 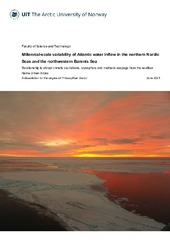 Climate change affects the Arctic to a greater extent than the global average, causing rapid sea-ice loss and changes in the inflow of warm Atlantic water in the Arctic. Arctic sediments host vast amounts of greenhouse gases in the form of gas hydrates (ice-like cages that trap gas within), that can be released to the seafloor if temperature increases and/or pressure decreases. Climate projections anticipate a further warming in the Arctic, but to improve such projections and better understand future changes interactions between climate, the ocean and the carbon cycle, it is necessary to improve long-term past climate and oceanic records. The main goal of this thesis is to reconstruct bottom water temperatures in the northern Nordic Seas and the NW Barents Sea to understand the evolution of Atlantic water inflow in the last deglaciation, and in last glacial period at times of millennial-scale climate oscillations, when the climate fluctuated between glacial-like stadials to abrupt (i.e., a few decades) warm interstadials (Dansgaard-Oeschger events; DO-events). We have also reconstructed (1) sea-ice variability and studied its linkage to the inflow of Atlantic water in the northern Nordic Seas, and (2) the gas hydrate stability zone (zone in the sediments where gas hydrates are stable) in the ‘Pingo area’ (NW Barents Sea) to investigate the effect of Atlantic water inflow in such a shallow gas hydrate system. To reconstruct bottom water temperatures, we used benthic foraminiferal Mg/Ca, that we complemented with an array of other proxies (sea-ice biomarkers, foraminiferal stable isotopes, benthic foraminiferal assemblages and ice-rafted debris) to reconstruct the overall paleoceanographic conditions in the study sites. The bottom water temperatures in both sites show considerable warming of up to 5°C during Heinrich Stadials, indicating that the inflow of Atlantic water reached the seafloor beneath a persistent sea-ice and meltwater layer. Instead, modern-like oceanographic conditions with colder bottom water temperatures occurred during interstadials. Our work demonstrates a strong coupling between sea ice and Atlantic water inflow during the last glacial period and potentially the important role of these two parameters shaping DO-events. Furthermore, the results in the ‘Pingo area’ reveal the key role of bottom water temperature shaping the dynamics of the gas hydrate stability zone and dissociation of gas hydrates. The promising results presented in this thesis highlight the importance of generating bottom water temperature records and studying its impacts on the carbon cycle and its paleoceanographic and paleoclimatic implications in the Arctic region.