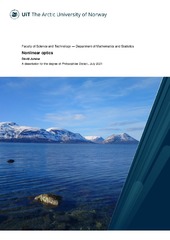 Nonlinear light-matter interactions have been drawing attention of physicists since the 1960's. Quantum mechanics played a significant role in their description and helped to derive important formulas showing the dependence on the intensity of the electromagnetic field. High intensity light is able to generate second and third harmonics which translates to generation of electromagnetic field with multiples of the original frequency. In comparison with the linear behaviour of light, the nonlinear interactions are smaller in scale. This makes perturbation methods well suited for obtaining solutions to equations in nonlinear optics. In particular, the method of multiple scales is deployed in paper 3, where it is used to solve nonlinear dispersive wave equations. The key difference in our multiple scale solution is the linearity of the amplitude equation and a complex valued frequency of the mode. Despite the potential ill-posedness of the amplitude equation, the multiple scale solution remained a valid approximation of the solution to the original model. The results showed great potential of this method and its promising wider applications. Other methods use pseudo-spectral methods which require an orthogonal set of eigenfunctions (modes) used to create a substitute for the usual Fourier transform. This mode transform is only useful if it succeeds to represent target functions well. Papers 1 and 2 deal with investigating such modes called resonant and leaky modes and their ability to construct a mode transform. The modes in the first paper are the eigenvalues for a quantum mechanical system where an external radiation field is used to excite an electron trapped in an electrical potential. The findings show that the resonant mode expansion converges inside the potential independently of its depth. Equivalently, leaky modes are obtained in paper 2 which are in close relation to resonant modes. Here, the modes emerge from a system where a channel is introduced with transparent boundaries for simulation of one-directional optical beam propagation. Artificial index material is introduced outside the channel which gives rise to leaky modes associated with such artificial structure. The study is showing that leaky modes are well suited for function representation and thus solving the nonlinear version of this problem. In addition, the transparent boundary method turns out to be useful for spectral propagators such as the unidirectional pulse propagation equation in contrast to a perfectly matched layer.

Paper 1: Juhasz, D., Kolesik, M. & Jakobsen, P.K. (2018). Convergence and completeness for square-well Stark resonant state expansions. Journal of Mathematical Physics, 59(11), 113501. Also available in Munin at https://hdl.handle.net/10037/22583. This article may be downloaded for personal use only. Any other use requires prior permission of the author and AIP Publishing.

Paper 2: Juhasz, D. & Jakobsen, P.K. (2019). Constructing a partially transparent computational boundary for UPPE using leaky modes. Journal of Mathematical Physics, 60(8), 083505. Also available in Munin at https://hdl.handle.net/10037/22582. This article may be downloaded for personal use only. Any other use requires prior permission of the author and AIP Publishing.