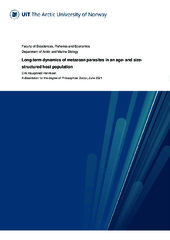 Parasites negatively affect hosts and may constitute serious management problems. At the same time, parasites are integral components of ecosystems and represent a substantial part of the biodiversity on earth. Understanding the ecological factors that influence the abundance and distribution of parasite populations is therefore important from a management perspective, but also to understand the mechanisms that shape populations and food webs. Parasites occur in complex food webs, with several opportunities for indirect effects. Ecosystem perturbations have been key to identify ecological processes that influence population and community dynamics. As some of these processes take a long time to unfold, they are only detectable from long-term studies. Unfortunately, few long-term studies have investigated host-parasite dynamics. The main aim of this thesis was to study how temporal changes in density and age- and size-structure of Arctic charr (Salvelinus alpinus) as a host species affected metazoan parasite dynamics across more than three decades of field observations from a subarctic lake. I also investigated the effects of the density of a competitor and predator, brown trout (Salmo trutta), on parasite abundance in the focal host Arctic charr.

I documented that experimentally reducing the density of Arctic charr through culling reduced the prevalence and intensity of two trophically transmitted Dibothriocephalus tapeworm species. The decline in the parasite infections was mainly due to culling-induced changes in host population age structure and increased predation rates from brown trout. Furthermore, I found that changes in host body size explained most of the variation in the dynamics of Salmincola edwardsii gill lice, a directly transmitted copepod parasite. In this case, the density of brown trout surprisingly amplified transmission rates to Arctic charr. Finally, the abundance and aggregation of the long-lived swimbladder nematode Cystidicola farionis was chiefly driven by host-population age structure. As host age increased, so did parasite abundance, which in turn reduced parasite aggregation. Heterogeneity in feeding and body size further increased aggregation, but stratifying the data by age diminished this effect. Accordingly, the relative composition of age classes each year determined the abundance and distribution of this parasite among the charr hosts.

Combining my results with detailed long-term studies on the free-living community in the lake allowed me to identify some key parameters that structure the long-term dynamics of three metazoan parasite taxa with contrasting life cycles. The inverse relationship between fish population density and individual consumption rates led to increases in somatic growth and fish body size as the density of Arctic charr decreased. This shifted the predominant size distribution of the host population from a zooplankivorous to a benthivorous ontogenetic stage, leading to a shift in parasite exposure from Dibothriocephalus spp to Cystidicola farionis. Furthermore, the reductions in Arctic charr density affected size-structured interactions with brown trout thereby increasing brown trout density, which both reduced (Dibothriocephalus) and facilitated (Salmincola) parasite transmission to Arctic charr.

In fish population ecology, size-structured population models highlight the strong link between ontogenetic development and population and community dynamics. These processes feedback to shape size distributions and individual fish behaviors. In this thesis, I show that such mechanisms also are crucial in shaping long-term parasite dynamics, but that the direction of effects vary depending on the parasite species and life cycle involved.