Radio wave propagation through the ionosphere 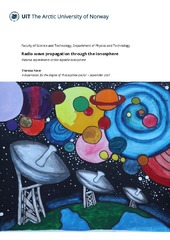 The non-transient plasma that is closest to Earth is found in the ionosphere at altitudes above approximately 60 km. It is observed either by ground-based, in-situ, or space-borne instrumentation and utilized to study and determine plasma phenomena and dynamics and the near-Earth space. Through active modification experiments, transmitting high-power, high-frequency radio waves into the ionospheric plasma, the interaction between waves and particles in a plasma can be studied in controllable and repeatable experiments. The transmitted radio wave is usually assumed to propagate either in the left-handed O mode or right-handed X mode. When encountering the respective cutoff or reflection condition in the ionosphere, the incident wave is reflected and does not propagate further into the ionospheric plasma. However, multiple experiments show that transionospheric wave propagation, beyond the reflection altitude and to the topside ionosphere, is possible for certain conditions. This thesis investigates the conditions and characteristics of transionospheric wave propagation in the polar ionosphere. Multiple experiments conducted at the EISCAT facilities near Tromsø, were performed transmitting an O-mode wave in the magnetic zenith direction. The findings show evidence of the incident wave propagating beyond its cutoff altitude and continuing propagation. Systematically recurring enhancements of the ion line spectra, generated by the modification wave, at the topside ionosphere are presented, as well as electron temperature enhancements consistent with wave propagation to higher altitudes. Further, a method for determining the electron density to a higher accuracy than previously achieved, has been developed. This permitted the calculation of altitude profiles of the plasma- , upper hybrid- , and multiple cutoff frequencies, enabling the identification of two separate cases of topside ion line enhancements. With this, a gyroharmonic effect at the top- and bottomside ionosphere has been identified for both cases, as well as the characteristics of transionospheric wave propagation. The observations are consistent with wave propagation in the L mode rather than the O mode. This thesis suggests a plausible propagation process and discusses the involved plasma processes. The results firmly establish the possibility of transionospheric wave propagation outside the standard radio window and thus expand our current understanding of wave-particle interaction and wave propagation in a plasma.