A study of bounded operators on martingale Hardy spaces 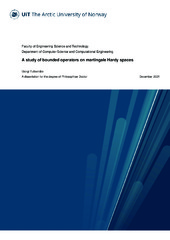 The classical Fourier Analysis has been developed in an almost unbelievable way from the first fundamental discoveries by Fourier. Especially a number of wonderful results have been proved and new directions of such research has been developed e.g. concerning Wavelets Theory, Gabor Theory, Time-Frequency Analysis, Fast Fourier Transform, Abstract Harmonic Analysis, etc. One important reason for this is that this development is not only important for improving the "State of the art", but also for its importance in other areas of mathematics and also for several applications (e.g. theory of signal transmission, multiplexing, filtering, image enhancement, coding theory, digital signal processing and pattern recognition).

The classical theory of Fourier series deals with decomposition of a function into sinusoidal waves. Unlike these continuous waves the Vilenkin (Walsh) functions are rectangular waves. The development of the theory of Vilenkin-Fourier series has been strongly influenced by the classical theory of trigonometric series. Because of this it is inevitable to compare results of Vilenkin series to those on trigonometric series. There are many similarities between these theories, but there exist differences also. Much of these can be explained by modern abstract harmonic analysis, which studies orthonormal systems from the point of view of the structure of a topological group.

The aim of my thesis is to discuss, develop and apply the newest developments of this fascinating theory connected to modern harmonic analysis. In particular, we investigate some strong convergence result of partial sums of Vilenkin-Fourier series. Moreover, we derive necessary and sufficient conditions for the modulus of continuity so that norm convergence of subsequences of Fejér means is valid. Furthermore, we consider Riesz and Nörlund logarithmic means. It is also proved that these results are the best possible in a special sense. As applications both some well-known and new results are pointed out. In addition, we investigate some T means, which are "inverse" summability methods of Nörlund, but only in the case when their coefficients are monotone.

The main body of the PhD thesis consists of seven papers (Papers A -- G). We now continue by describing the main content of each of the papers.

In Paper A we investigate some new strong convergence theorems for partial sums with respect to Vilenkin system.

In Paper B we characterize subsequences of Fejér means with respect to Vilenkin systems, which are bounded from the Hardy space Hp to the Lebesgue space Lp for all 0 < p < ½. We also proved that this result is in a sense sharp.

In Paper C we find necessary and sufficient condition for the modulus of continuity for which subsequences of Fejér means with respect to Vilenkin systems are bounded from the Hardy space Hp to the Lebesgue space Lp for all 0 < p < ½.

In Paper D we prove and discuss some new (Hp, weak-Lp) type inequalities of maximal operators of T means with respect to Vilenkin systems with monotone coefficients. We also apply these results to prove a.e. convergence of such T means. It is also proved that these results are the best possible in a special sense. As applications, both some well-known and new results are pointed out.

In Paper F we derive a new strong convergence theorem of Riesz logarithmic means of the one-dimensional Vilenkin-Fourier (Walsh-Fourier) series. The corresponding inequality is pointed out and it is also proved that the inequality is in a sense sharp, at least for the case with Walsh-Fourier series.

These new results are put into a more general frame in an Introduction, where, in particular, a comparison with some new international research and broad view of such interplay between applied mathematics and engineering problems is presented and discussed.