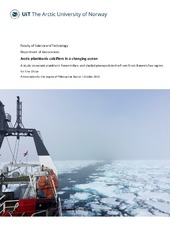 The Arctic marine realm is being transformed due to the anthropogenically-induced climate change. In the Arctic, the effects of climate change are intensified due to polar amplification and have led to processes in the ocean such as sea-ice retreat, ocean acidification and the increased presence of boreal species referred to as ‘Atlantification’. This thesis presents rare investigations of marine calcifiers in the Fram Strait-Barents Sea region; planktonic foraminifera (Phylum Retaria) and the shelled pteropod Limacina helicina (Phylum Mollusca). There are few previous studies signifying several unknowns pertaining to their ecology and life cycles, and hence how they have and will continue to respond to climate change. The overarching aim of the thesis is to increase the knowledge of living planktonic foraminifera and pteropods in the Arctic, more specifically their distribution patterns, absolute and relative abundance, seasonality, diversity, ontogeny, and calcification. These studies are based on investigations from two dynamic areas; the Bjørnøyrenna Craters in the northern Barents Sea that is a site of intense methane seepage, and the Northeast Greenland Shelf where there is a rapid sea-ice reduction and interplay between Polar and Atlantic water masses. This thesis has shown that the Fram Strait-Barents Sea region is characterized by low species diversity of the planktonic foraminiferal faunas, where Neogloboquadrina pachyderma dominates in Polar Water and Turborotalita quinqueloba dominates in Atlantic Water. Our study areas have low standing stock of both planktonic foraminifera and pteropods in spring and a medium to high standing stock in summer. They have a distinct vertical shell density gradient and are not affected by intense methane seepage even in the relatively shallow Barents Sea. In terms recent impact of climate, there may be a decrease in the relative abundance of N. pachyderma on the Northeast Greenland shelf compared to studies from the 1990s, and sub-tropical species can be found in the Barents Sea. Furthermore, this thesis has helped in filling gaps in research into the impacts of ocean acidification in the Arctic, especially pertaining to methane release from dissociation of methane hydrates. Lastly, we have been able to show that planktonic foraminifera and pteropods in the same size class captured from the same location and depth interval have a wide range of shell densities. The same is also true for planktonic foraminifera found in surface sediments. These two points may complicate modern geochemical or ocean acidification studies as well as paleo-studies.

Data related to Paper I: