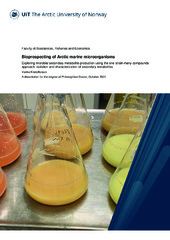 Natural products have been used by humans since ancient times as benefactors for improved health. Prior to modern medicine and chemistry, these compounds remained hidden in the plants, animals and other organisms used to heal inflammation, wounds, headache and stomachache among other conditions. Since the start of modern drug discovery with isolation of morphine in 1805, numerous natural products have been isolated from plants, animals, macroorganisms and microorganisms. Today, natural products, or their derivatives, are used as pharmaceuticals within a wide range of therapeutic areas, including cancer, pathogenic infections, inflammation and pain.

Microbial natural products have played a particularly important role in the field of antibiotics. The discovery of penicillin from the Pencillium rubens fungus by Alexander Fleming in 1928 marked the beginning of the “Golden Age” of antibiotics that lasted until 1962, where most antibiotic classes in clinical use today were discovered.

In paper I, a Pseudomonas sp. bacterium was cultivated in different growth media. The fermentation extracts were fractionated and tested for bioactivity, revealing different bioactivity profiles of the fractions from the different media. Dereplication of the active fractions by UHPLC-HR-MS and molecular networking led to identification of six rhamnolipid compounds, including one novel mono-rhamnolipid. All six compounds had antimicrobial activities, while three had cytotoxic activities.

In paper II, a fractionated extract of the bacterium Lacinutrix sp. displayed antibacterial activity. Dereplication of the active fraction resulted in identification of two lyso-ornithine lipids, 1 and 2. The compounds were isolated and their structures were elucidated with UHPLC-HR-MS and NMR. Bioactivity screening showed that 1 had antibacterial activity, while 2 had cytotoxic activity.

In paper III, the fungus Digitatispora marina was fermented under different cultivation conditions. Fermentation extracts were fractionated and bioactivity screening of the fractions revealed antibacterial and cytotoxic activities. UHPLC-HR-MS analysis of the fractions showed a compound with an isotope distribution pattern for an ion with a single chlorine atom. The compound was isolated, and structure elucidation with NMR identified it as chlovalicin B. Its bioactive properties were broadly evaluated, revealing it had weak cytotoxic activity but no antimicrobial activities.