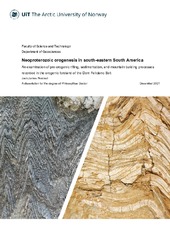 The Dom Feliciano Belt records the convergence between multiple South American and African cratonic bodies during the Neoproterozoic, and forms part of the larger South Atlantic Neoproterozoic Orogenic System (SANOS). Studying the evolution of the Dom Feliciano Belt allows the development of tectonic models spanning the time from pre-orogenic rifting to orogenesis, and the information recorded in any one part of the belt can have implications for the entire system. The nature of orogenesis in the SANOS has been strongly debated in recent years, with the contention hinging on the timing of convergence and the presence or absence of long-lived subduction prior to collision. This work focuses on the Kaoko–Dom Feliciano–Gariep belts, which comprise the southern part of the SANOS. Supracrustal metasedimentary rocks in the foreland position of the Dom Feliciano Belt (the Schist Belt) record the entire duration of orogenesis from pre-orogenic rifting to metamorphism and thrusting related to early convergence and crustal thickening. However, there are currently little to no constraints on the timing or conditions of these major tectonic events. The aim of this work is to understand the tectonic context and evolution of the Kaoko–Dom Feliciano–Gariep orogenic system by using a combination of methods including structural geology, geochronology, and phase equilibrium modelling. This work is divided into three papers, focussing on the Dom Feliciano Belt foreland in Santa Catarina, Brazil (Papers I & II), and in Uruguay (Paper III). The results from Paper I show that the protolith of the Schist Belt can be correlated along the majority of the Dom Feliciano Belt, as well as across the Atlantic Ocean in the Kaoko Belt, indicating close proximity between the South American (Luis Alves–Nico Pérez) and African (Congo and Kalahari) cratons at the onset of sedimentation and rifting. The results from Papers II & III show that early metamorphism in the foreland and hinterland, driven by crustal thickening and subsequent exhumation, was coeval, occurring between ca. 660–640 Ma. We interpret this as the earliest record of orogenesis in the system. The results from Paper III show that a second major transpressive event from ca. 580 Ma resulted in further metamorphism and deformation in the southern Dom Feliciano Belt foreland, coeval with transpression in the eastern part of the system in the Kaoko and Gariep Belts. The results of this study indicate an intracontinental rift or back-arc rift setting for the Kaoko–Dom Feliciano–Gariep system prior to orogenesis.