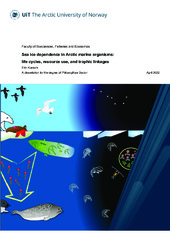 Climate warming in the Arctic has resulted in widespread changes in the physical oceanographic characteristics of the Arctic Ocean. One particularly visible change is the loss of sea ice both within the Arctic Ocean and in the surrounding shelf seas. Compared to the other shelf seas, the Barents Sea has experienced the largest declines in sea ice extent, with much of this loss occurring during winter. In response to these changes, a range of biological responses have already begun–from population declines to changes in community compositions. This thesis explored sea ice dependencies of various Arctic marine organisms. Paper 1 explored if a pelagic phase could be party of the life cycle of a so-far presumed fully sea ice-associated amphipod. Paper 2 investigated seasonal (rarely studied polar night versus commonly studied polar day) diet changes in three zooplankton and two sea ice-associated amphipod species. Paper 3 quantified the contributions of sea ice-associated and pelagic (open water) carbon sources to diets of two different Arctic seal species: the harp and ringed seals. The main findings of this thesis demonstrate that in this time of transition–where Arctic sea ice is still present but receding–the studied Arctic marine organisms exhibit a wide range of sea ice dependence. While the seal species displayed strong seasonal associations to the sea ice habitat (in terms of energetic sources), zooplankton and sea ice amphipod species had varying degrees of trophic plasticity (for example, polar night feeding activity and being supported by pelagic carbon). This thesis research increases the knowledge of potential biological response to the current state of the Arctic.