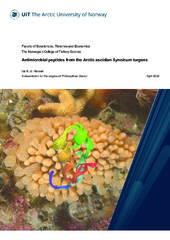 The rise in frequency of antibiotic resistant pathogenic bacteria makes the need for new treatment options for previously curable bacterial infections ever more important. In the process of discovering and developing antibacterial agents, one powerful approach has been borrowing wisdom from nature. Antimicrobial peptides (AMPs) are critical components of the innate immune systems found in almost all eukaryotic life forms. Their mode of action includes disruption of the bacterial membrane and to trigger supporting immune responses. Due to these properties, AMPs are considered promising lead structures that can be further developed into commercially available antibiotics to treat or prevent human diseases caused by bacteria. The work conducted in this thesis aims to discover and characterize novel antimicrobial peptides from the Arctic marine ascidian Synoicum turgens by using a marine bioprospecting approach. This includes collection, extraction and fractionation of biomass, antibacterial bioactivity testing and AMP isolation followed by chemical and biological characterization. For one isolated peptide class, truncated versions were prepared, aiming to produce shorter, linear variants with retained antimicrobial activity. In paper I, turgencin A and B and their oxidized derivatives were discovered through bioassay-guided purification. These peptides had an unusual disulfide connectivity, rarely seen in marine AMPs. Both turgencin A and B were potently active against all assayed bacterial strains. Membrane assays showed that the peptides cause bacterial membrane disruption within a few seconds. Turgencin A and B also displayed some cytotoxic activity against two human cell lines. Oxidation of the methionine present in both peptides decreased the bioactivities in all assays. Turgencin A, being the most potent AMP, was subject for sequence analysis and prediction of antimicrobial potential of different regions in paper II. Truncated and modified variants of turgencin A were synthetically produced to make smaller AMPs with the potential of being developed into antimicrobial drug leads. These 10-mer peptides, named StAMP-1–11, were made using an amino acid replacement strategy. Some of the Trp enriched peptides had similar bactericidal activity as the parent peptide turgencin A, and no cytotoxic activity against the mammalian cell lines. During turgencin isolation, a series of other smaller peptides were discovered in the same extracts presumably with antimicrobial activity. These isolated and characterized ~2 kDa, cysteine-rich peptides (CRPs) (described in paper III), were named St-CRP-1 and St-CRP-2 and contained 18-19 amino acids. The St-CRPs shared a disulfide connectivity pattern with alpha-defensins, had a neutral net charge, moderate antibacterial activity and showed no cytotoxicity. In addition, the introduction section provides background information on topics related to the thematic of the articles. This includes an introduction to bacteria, antibiotics and antibiotic resistance, AMPs, ascidians, and the marine environment.