Autonomous Navigation in (the Animal and) the Machine 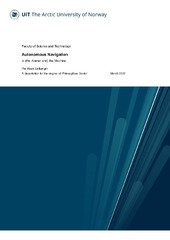 Understanding the principles underlying autonomous navigation might be the most enticing quest the computational neuroscientist can undertake. Autonomous operation, also known as voluntary behavior, is the result of higher cognitive mechanisms and what is known as executive function in psychology. A rudimentary knowledge of the brain can explain where and to a certain degree how parts of a computation are expressed. However, achieving a satisfactory understanding of the neural computation involved in voluntary behavior is beyond today’s neuroscience. In contrast with the study of the brain, with a comprehensive body of theory for trying to understand system with unmatched complexity, the field of AI is to a larger extent guided by examples of achievements. Although the two sciences differ in methods, theoretical foundation, scientific vigour, and direct applicability, the intersection between the two may be a viable approach toward understanding autonomy. This project is an example of how both fields may benefit from such a venture. The findings presented in this thesis may be interesting for behavioral neuroscience, exploring how operant functions can be combined to form voluntary behavior. The presented theory can also be considered as documentation of a successful implementation of autonomous navigation in Euclidean space. Findings are grouped into three parts, as expressed in this thesis. First, pertinent back- ground theory is presented in Part I – collecting key findings from psychology and from AI relating to autonomous navigation. Part II presents a theoretical contribution to RL theory developed during the design and implementation of the emulator for navigational autonomy, before experimental findings from a selection of published papers are attached as Part III. Note how this thesis emphasizes the understanding of volition and autonomous navigation rather than accomplishments by the agent, reflecting the aim of this project – to understand the basic principles of autonomous navigation to a sufficient degree to be able to recreate its effect by first principles.