Changing circumstances : implications for trophic dynamics and species conservation in the Fennoscandian tundra 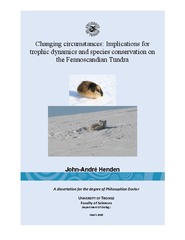 A special case of population fluctuation is multi-annual population cycles. While such population cycles exist in several ecosystems, they are more prominent in northern (e.g.tundra) ecosystems, especially among key stone herbivore species. These herbivores providean important ecosystem function in the sense of pulsed flows of resources (i.e. for predators) and disturbances (i.e. for vegetation) throughout the ecosystem. However, the circumstances on the tundra are changing. For instance, large scale collapse of population cycles of many herbivors has been reported, as well as northward expansion of novel predators (e.g. red fox). These changes, heavily connected to climate changes, are capable of disrupting the function and structure of such systems. Overall this thesis aims to outline and evaluate the recent dramatic changes in multi-annual population cycles of many herbivores and the possible implications of such changes on the trophic dynamics and species conservation in the Fennoscandinavian tundra ecosystem. First I show that the recent collapse of multi-annual population cyclles are now a widespread phenomenon, extending several species and ecosystem barriers. Next I show, based on long time series of fox bounty data, that these recent changes have some historical analogies. Specifically, I show that the highly publicized patterns (e.g. geographic gradients, large scale synchrony) in Fennoscandian small rodent cycle have been buject to large spatio-temporal trensitions in their patterns, being highly non-stationary. I also demonstrate that collapse of cycles similar to the recent events, though on a smaller spatial extent, have occurred earlier and that these incidents seem to concur with shifts between cold and warm climatic periods. Then I demonstrate wich aspects of the recent changes in the dynamics of key prey species is likely to heavily affect the viability and existence of tundra predatirs strongly adapted to the pulsed flow of resources provided bycyclically fluctuating prey populations. Furthermore, the effect of recent and future projections of climate change may facilitate the establishment of novel predator species, which may act as dominant competitors for native species for habitat and prey. I here show that increased competition with red fox may be detrimental to arctic fox viability, especially if subsidies (e.g. reindeer carcasses) are available to the dominant competitor. Finally, I show that attempts to conserve native predators, such as the arctic fox, should take into account the factors that govern their demography and thus population dynamics. I show thet the effect of management action is highly dependent onthe phase of the demographic cycle of arctic fox. This means that management intervantion should be continous, but most focused to moments in time where the effect is expected to be most pronounced.