Ice in Norwegian subarctic fjords and coastal regions: An examination of ice formation, properties, and trends based on remote sensing and in situ data 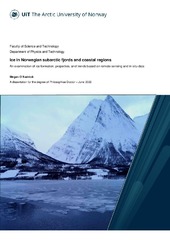 Larger fjords along the Norwegian coast are ice free all year due to the influence of warm Atlantic water, however, sea ice can form in the inner parts of fjords and in smaller fjord branches. While a wide breadth of work exists examining mainland Norwegian fjords often focused on water mass dynamics and their link to biological processes, little research has been conducted on specifically sea ice in these locations. The overarching goal of the work presented here is to address this gap in research and knowledge. To do so, first an assessment of ice extent in fjords and other coastal areas along the coast of mainland Norway from 2001 to 2019 between February through May is completed. Through the development of an automated method to estimate quantitatively ice extent in optical satellite imagery, variability in ice extent between years as well as within single seasons is highlighted for regions and specific fjords. An investigation into the factors potentially driving ice formation is conducted with focused placed on air temperature, snowfall, and rainfall plus snowmelt. Next, seven fjords located in northern Norway are studied in-depth through the collection of ice and ocean measurements over the course of three winter seasons spanning 2017 into 2020. Ice stratigraphy, bulk ice salinity and oxygen isotopic composition, ocean temperature, salinity and oxygen isotopic composition, and river isotopic composition are analyzed. Possible connections to temperature and snowfall are revisited in addition to river runoff illuminating further variations not only in ice extent between seasons but also ice properties and the factors driving ice formation. Lastly, bulk ice salinity and oxygen isotopic composition are given a closer look through the inversion of previously derived, separate, relationships of each to growth rate and interface water composition. Results provide a promising method to deduce ocean and weather conditions during ice growth in fjords and coastal areas where continuous measurement through winter is not possible.

Paper III: O’Sadnick, M., Petrich, C. & Skarðhamar, J. The use of ice bulk salinity and δ18O to investigate changes in the fjord environment over a winter season. (Submitted manuscript).