Meroplankton on Arctic inflow shelves: Diversity, seasonality and origins of benthic invertebrate larvae on the Barents and Chukchi shelves 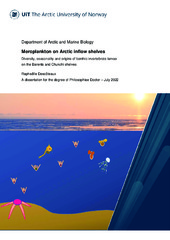 Planktonic early life stages of marine benthic invertebrates play an important role in dispersal and at times represent a substantial proportion of the zooplankton. Information about the larval communities present on the Arctic inflow shelves of the Barents and Chukchi Seas, however, is incomplete and limited because of infrequent sampling and low resolution of identification. The aims of the work described in this thesis were to characterize the meroplanktonic communities of the Barents and Chukchi Sea shelves in greater taxonomic (using DNA barcoding), spatial and temporal resolution than previously achieved, and to investigate the possible origins of the identified larvae. Key findings from this thesis include 1) much higher diversity of invertebrate larvae was found on the Arctic inflow shelves than previously, 2) larvae are present on the shelves year-round but their abundances peak in late summer and fall, 3) the larval community is composed mainly of taxa known to the region but there is evidence of some species drifting in from further south. Findings from this thesis highlight the immense potential gained from species-level identification and shine a light on critical yet poorly-known life stages of the rich Arctic shelf benthic communities in a time of rapid climate change.