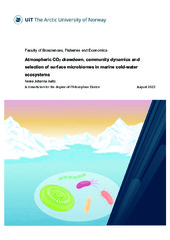 The European Arctic is characterized by large surface areas of coastal seas and long coastlines where important ecosystem processes are regulated by marine microbiomes that contribute to global carbon cycling via primary productivity and atmospheric CO2 drawdown. In addition to biogeochemical cycling, these complex microbial ecosystems also support major marine food webs and lend themselves to marine bioprospecting for novel biotechnologies. However, they are not well understood and remain unpredictable. For example, northern coastal Norway is periodically affected by unwanted ecosystem functions such as sporadic harmful algae blooms that are detrimental to local aquaculture industry. These cold adapted marine microbiomes perform ecological processes that are often driven by phytoplankton and their associated heterotrophic communities which undergo strong seasonal variation within complex and variable oceanographical and biogeochemical conditions. Climate change driven temperature increases with resulting direct and undirect changes on environmental conditions have been reported to alter microbial community structures of surface microbiomes. Hence, these important microbial ecosystems are in transition, and it is difficult to predict the trajectory of how specific ecosystem functions may be changing.

This thesis is centered around cold-water communities of phytoplankton and bacterioplankton with the aim to enhance our contemporary understanding on surface microbial ecosystems and their function with respect to carbon cycling, community dynamics and community selection. Paper I and Paper II took place in northern Norwegian fjords and costal systems where spatial variation and magnitude of atmospheric CO2 uptake were investigated and the main physical and biological factors driving surface partial pressure of CO2 with respect to atmospheric CO2 were assessed in four fjords and a coastal bay through seasonal changes. The results indicate that northern Norwegian fjords free of sea-ice act as a sink for atmospheric CO2, although the magnitude of air-to-sea CO2 flux showed fjord-specific variation, and the biological fixation of CO2 is a strong driver of CO2 undersaturation. In addition, the temporal and spatial dynamics of early summer microeukaryotes with co-blooming bacteria were examined during a destructive haptophyte Chrysochromulina leadbeateri-associated harmful algae bloom. The coastal habitats harbor highly localized phytoplankton microbial communities which succession dynamics of blooming populations (including C. leadbeateri) undergo strong temporal variability. Paper III took place across a long transect from Atlantic water influenced Barents Sea to less influenced Nansen Basin in the high Arctic with the aim to understand more about the influence of ecological community processes on the distribution of phytoplankton and microbial taxa. Inferences based on phylogenetic turnover, generated through null modeling randomization of phylogenetic relatedness, indicates that the dominant selective force is homogeneous across the studied transect despite differences regarding temperature, sea-ice conditions, and origin of a water mass. Our findings highlight that both large scale and local studies are important to form the needed comprehensive understanding of these microbial ecosystems as the regional taxonomic pool is determined by fundamental ecological processes but community structure influencing ecosystem function is instead subjected to more localized variation of abiotic and biotic factors.