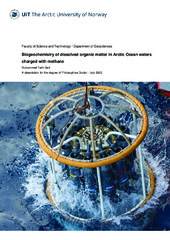 thesis.pdf (12.89Mb)
Thesis introduction, Papers I and II (PDF)
thesis_entire.pdf (14.18Mb)
Entire thesis in one comprehensive file (PDF)
File(s) with restricted access are under embargo until 2024-11-25

Dissolved organic matter (DOM) is defined as organic matter that is smaller than a nominal pore size filter (e.g., 0.7 µm) that passes through during the filtration of aquatic samples. It comprises the largest reservoir of reduced carbon (700 Pg C) in the oceans. The DOM pool is in close interaction with all the elemental cycles and food chains in the ocean and is an essential component in the marine microbial loop. Methane is seeping from numerous geological sources in the Arctic Ocean associated with multiple mechanisms that elevate methane production and release. Independent of the mechanism, however, liberated methane is predominantly consumed in the water column by methanotrophic bacteria (MOB), which use methane as a source of carbon and energy during an aerobic enzymatic reaction called methane oxidation (MOx). In sedimentary fluid flow systems such as cold seeps or hydrothermal vents, the amount of methane release and subsequent MOx would be substantial and further trigger other ecosystem processes such as bacterial growth and heterotrophic consumption and consequent mechanisms that alter DOM composition in the water column. Since methane is one of the most potent greenhouse gasses in the atmosphere and due to its subsequent effect on global warming, it has been quantified extensively in the oceanic environments and its fate in the water column has been investigated in different types of geological settings. However, the effects of methane emanation and methane-driven processes on DOM dynamics in the water column have been merely constrained. The main objective of this thesis was to unravel the modifications of DOM composition in relation to methane release in the Arctic Ocean cold seeps and hydrothermal vents.