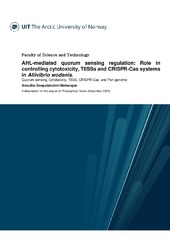 Aliivibrio wodanis has been associated with winter ulcer disease outbreaks. It has been reported that A. wodanis may act as a secondary pathogen in disease outbreaks and pathogenesis. The culture supernatant of A. wodanis causes a cytopathogenic effect (CPE) in various salmon cell lines. Moreover, in an Atlantic salmon bath challenge experiment, A. wodanis alone produces clinical symptoms in the fish. However, the contribution of A. wodanis to winter ulcer disease is not clear. Despite the knowledge to date and the research done in the field, there are still unanswered questions and a knowledge gap. Several Vibrio and Aliivibrio species use quorum sensing (QS) to regulate genes connected to host-pathogen interaction, virulence, survival, and adaptation mechanisms. In other aliivibrios, several QS systems, including the ainS/AinR and a transcriptional regulator litR (LuxR homologs), have been reported to regulate various phenotypic traits.

Moreover, temperature is an essential factor that governs the prevalence of bacteria in the environment and host and is a potent regulator of pathogenesis in many bacteria. Hence the thesis aimed to understand better the QS`s role and the effect of temperature in A. wodanis. Our study reveals that ainS autoinducer synthase is required to produce the Acyl-Homoserine Lactone (AHL) 3OHC10-HSL in A. wodanis.

Bacteria use the Type VI secretion system (T6SS) for multiple functions like iron transport, interspecies competition, virulence, and niche adaptations. A. wodanis co-exists with the main pathogen M. viscosa in the infected fish during the winter ulcer disease outbreaks. In addition, the bacterium has been shown to hinder the growth and virulence of M. viscosa. The thesis further investigated the mechanisms by which A. wodanis may survive together with M. viscosa in skin ulcers and during winter ulcer outbreaks. We found that the A. wodanis genome encodes three T6SSs (T6SS1-T6SS3) and auxiliary clusters (Aux1-4); and several potential Type VI secretion system effectors (T6SEs). In addition, the A. wodanis genome is found to contain a type IF CRISPR-Cas system. This suggests that these two mechanisms may play a role during the survival, adaptation, and immune function of A. wodanis in its natural environment, inside the host or during its co-existence with M. viscosa. Next, we analyzed the genome-wide transcriptomics of A. wodanis and QS mutants litR and ainS mutants grown at different temperatures and cell densities.

We found that the genes involved in T6SSs, and CRISPR-Cas systems are regulated by cell density, temperature, and QS. The transcriptome analysis showed that the complete T6SS2 apparatus was less expressed in the litR/WT, suggesting litR regulates T6SS2 in A. wodanis. In this study, the transcriptome analysis demonstrated that deletion of litR decreased the hcp1 expression, a gene involved in bacterial competition and virulence in other bacteria. In addition to litR dependent expression, expression value of hcp decreased three times in litR/WT, HCD at 12°C when compared to 6°C and HCD. Our observation suggests that temperature 6°C and litR are crucial for expressing the genes related to virulence.

Understanding the strain diversity of the same species is important in exploring strategies to survive in a changing environment. Finally, we wanted to study the genomic similarity and variation between A. wodanis isolates by performing a pan-genome analysis of twenty-two A. wodanis isolates collected from various locations across Norway. The analysis revealed an open pan-genome with a wide inter-species diversity in A. wodanis genomes. We examined the phylogenetic relatedness between the isolates using single nucleotide variants (SNVs) and core genes. The phylogenetic trees were distributed into five groups, where Group 2, 4 and 5 encompassed conserved isolates. The accessory genomes (shell and cloud) accounted for about 73% of the total pan-genome suggesting the genomes have acquired most of the genes through horizontal gene transfer (HGT). Whole and cloud genome functional annotation revealed a larger number of genes related to functional families such as metabolism, signaling and cellular processes and genetic information processing, suggesting they are involved in energy metabolism and environmental interactions. By further analyzing the twenty-two A. wodanis genomes, we identified diverse CRISPR-Cas systems, spacers, and prophages. About 60% of isolates encoded a different CRISPR-Cas system compared to the reference strain. Like the reference strain, the other twenty-one A. wodanis isolates also encode multiple T6SSs where the T6SS2 and Aux-2 are either absent or showed differences in about 80% (18 out of 22) of isolates. In addition to the T6SSs and CRISPR-Cas, other elements relevant for adaptation, virulence, and survival potentials, such as virulence factors (VFs) and biosynthetic gene clusters (BGCs), were explored. We have found that the predicted VFs and BGCs were conserved between the A. wodanis isolates.

The results presented in this work yield knowledge about QS regulation of virulence, survival, and adaptation mechanisms in A. wodanis. This aids in understanding the mechanisms connected to co-existence of A. wodanis with M. viscosa and winter ulcer disease development and treatment.