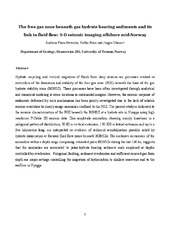 What causes the escape of natural gases to the seafloor and how significant this escape has been along the mid-Norwegian continental margin? These are questions that guided the doctoral thesis. The thesis is part of a research project supported by the European Commission and the Norwegian Research Council, which aims at quantifying geological processes that control fluid flow and gas hydrate formation along the Norwegian-Barents-Svalbard margin. The thesis was divided in three stages according to the following three main objectives: (1) to assess the distribution of shallow gas reservoirs and paths for fluid migration from deep sources; (2) to investigate the internal structure of a vertical fluid escape feature (chimney) through implementation of high resolution travel-time reflection tomography modeling; and (3) to infer a time scale for fluid escape in the region through detailed seismic characterization of depositional settings and sediment deformation of sediments deposited during the last three major glaciations and their inter-glacial cycles. The methodology implemented consists in the integration of velocity analysis techniques and seismic imagine applied to different resolution seismic data sets. The thesis presents results from four articles that together bring us closer to the overall understanding of fluid flow related systems in Nyegga, offshore mid-Norway. While each article has separate and specific aims, the problems and results covered by the four articles are nevertheless guided by a single motive: to access geophysical and geological indications of sub-seabed fluid flow processes by the implementation of non-invasive methods. Two of the most important results encountered are first, that gas hydrates are at present hindering catastrophic escapes of fluids towards the seafloor; and second that fluid escape in the margin has seemingly been episodically. Fluid escape periods seem to be related to overpressure generation during the last three glaciations.

Paper number 1 and 2 of the thesis are not available in Munin due to publishers' restrictions:
1. Plaza-Faverola, A., S. Bünz, and J. Mienert (2010). "Fluid distributions inferred from Pwave velocity and reflection seismic amplitude anomalies beneath the Nyegga pockmark field of the mid-Norwegian margin", Marine and Petroleum Geology, 27(1): 46-60
2. Plaza-Faverola, A., G. K. Westbrook, K. Stephan, R. Exley, A. Gailler, T. Minshull and K. Broto, (2010). "Evidence from tomographic investigation of Vp variation for accumulation of substantial methane hydrate in a fluid-escape chimney in the Nyegga pockmark field, offshore Norway". JGR solid earth. v. doi:10.1029/2009JB007078, in press.