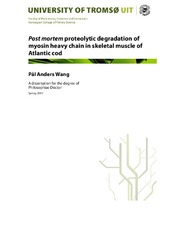 One of the most important parameters of quality regarding meat both from mammals and fish is texture. The post mortem degradation of muscle and connective tissue proteins during tenderization of meat from warm-blooded animals is unwanted in fish due to a loss of product quality. Soft fillet and gaping are common problems both in wild and farmed cod and have huge impact on the quality and the consumers’ perception of the products. The underlying mechanisms responsible for the changes in texture are not known, but endogenous proteolytic enzymes seem to play an important role in the process. A muscle cell contains several proteolytic systems. Among these are the multicatalytic proteasome, lysosomal cathepsins, cytosolic calpains and metalloproteinases. It has been shown that calpains are important in the degradation process resulting in tender meat in warm-blooded animals. In fish, the calpains and cathepsins have been suggested to act in cooperation resulting in the observed post mortem degradation of muscle proteins. Many of the cathepsins and calpains have been shown to be able to degrade myofibrillar proteins in vitro systems. Such systems have traditionally been a main strategy when studying protein degradation post slaughter in fish muscle. A weakness in such systems is that grinding of muscle tissue and isolation of proteins from the homogenate leads to a loss of the internal control system in the muscle. Another problem by using such systems is that the conditions are often highly optimized and therefore very different from normal post mortem muscle. The temperature and pH is often different from normal post mortem muscle. In this thesis cathepsin D, one of the candidate enzymes being responsible for post mortem muscle degradation in cod has been studied. The enzyme was purified from cod liver, and an antibody specific against the enzyme was produced in mouse. The isolated enzyme had lower tolerance towards temperature than a similar commercial available enzyme isolated from bovine. The antibody detected cathepsin D in extracts from several other fish species. Further, the degradation of myosin heavy chain (MHC) was studied. The degradation of MHC in isolated myofibrils occurred at the highest rate at high temperature (20ºC) and low pH (5.5), but degradation occurred even when stored on ice and at relevant muscle-pH. For comparison, intact muscle was stored prior to isolation of myofibrils. The results showed that the MHCdegradation occurred in a similar pattern in intact muscle, however less prominent. It was also shown that cathepsin D was associated with the myofibrils, and the enzyme could not be completely removed even after several washing steps. A model system was established, that made it possible to study how small changes in pH and inhibitors of proteolytic enzymes influence on the MHC-degradation in intact muscle tissue post slaughter. A low muscle-pH (6.05-6.3) did lead to degradation of MHC, while the protein stayed unchanged at pH 6.9. Inhibitors of cysteine and aspartic acid proteinases were obviously more efficient in preventing MHC-degradation than inhibitors of serine and metalloproteinases. A surprising observation was that EDTA, an inhibitor of metalloproteinases, increased the degradation of MHC. The conlusion of this thesis is that lysosomal cathepsins of the cysteine- and aspartic acid-types are responsible for the MHC-degradation in intact muscle. The new model system will be suitable when studying how other muscle proteins are degraded in intact muscle tissue post slaughter, and which enzymes that are involved.