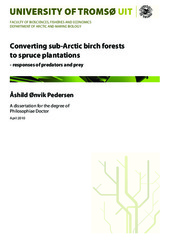 In northern Norway large areas of sub-Arctic coastal birch forests have gradually been replaced by non-native spruce plantations during the last century. Spruce planting changes the forest floor vegetation and soil conditions, increase the amount of artificial edges and alter the forest landscape mosaics. Such tree species conversions are likely to reduce or increase suitable wildlife habitat, alter animal space use patterns, habitat selection and population and community dynamics. In a spatially extensive study design using live-trapping, snow tracking and baited track boards, I studied responses of individual predator species (red fox, pine marten, stoat, least weasel, lynx and corvids) and prey species (mountain hare, voles, common shrew and gallinaceous birds) and their interactions at three spatial scales ranging from within forest stands to landscape mosaics. I also included a study along the birch forest – alpine tundra ecotone to compare nest predation in native landscapes with those impacted by tree species conversion. In a 10 year observational trapping study of small mammals, I found much lower abundances of common shrew, red vole and field vole in spruce plantations compared to four birch forest types at stand scale. Autumn abundances were most impacted indicating that growth rates in the reproductive season were more influenced than winter declines. Species associated with productive forest habitats were most negatively impacted. Prevalence of endoparasites (helminths) in common shrew was highest in the rich birch forests and lowest in spruce plantations. In a 3 year observational study of an assemblage of ground dwelling vertebrates in winter, scale- and time dependent responses to spruce plantations were documented for the dominating species (red fox, stoat, mountain hare and voles). Small-scale affinity to plantation edges was found for most species. Habitat selection for and against spruce plantations at stand scale alternated profoundly among the years and species, however, in qualitatively similar patterns among the dominant species. At landscape scale only red fox was negatively related to amount of spruce plantations, while mountain hares exhibited annual shifts in occurrence relative to the amount of spruce. Predators and prey were related in time and space at the two smallest scales which may be explained by year- and stand-specific snow conditions affecting the predator-prey interactions within the community. In two experimental nest predation studies of 1 and 3 years, respectively, the omnipresent corvids were the dominant predators. The effects of spruce plantation edges and stands on predator prevalence were consistent with those of Einarsen et al. (2008), who concluded that edges and stand types had limited influence on spatial distribution of nest predators (Paper IV). Predator prevalence along the birch forest – II alpine tundra ecotone was remarkably consistent among locations and habitats. These results suggest that man-made and natural edges were not able to explain the overall high levels of predation observed. A decade of research on different wildlife species has documented clear responses to spruce plantations. Among the strongest effects is the pervasive negative impact on small mammal abundances and passerine bird communities in the studies of Hausner et al. (2002; 2003). Common for these species are their responses to habitat qualities at small spatial scales and they serve as prey for the predator communities. Reduction in abundance of key functional species, in particular the small mammals, is expected to influence the overall community structure and dynamics of vertebrates in this boreal forest ecosystem. The relatively weak responses documented at landscape scale (except for red fox) might change when young spruce plantations matures into old closed canopy monocultures. The findings emphasise the importance of maintaining a mix of tree species and high spatial heterogeneity of forest stands to prevent negative impacts on prey species abundances. The studies in this thesis have also shown that modern forestry can reinforce the effects of climate change. Changes in winter climate may modify snow conditions which in turn alter the role of forest stand mosaics in determining the structure of vertebrate communities. Moreover, the most probable cause of long-term declines in small mammal populations is changes in winter climate (Ims and Fuglei, 2005). These results comply with other studies reporting that modern forestry contribute to longterm declines of small mammal populations (Christensen and Hörnfeldt, 2006; Hörnfeldt et al., 2006; Christensen et al., 2008).