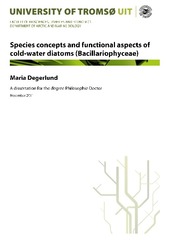 The choice of species concept when delineating phytoplankton species is decisive for our knowledge of species diversity and distribution, but will also affect our understanding of the functioning of marine ecosystems. This is particularly true for so-called cryptic species, which may show high degree of genetic and physiological heterogeneity although being morphologically similar. A precise species delimitation procedure appreciating the value of genotypic as well as phenotypic traits is therefore important. In this thesis, species concepts and functional aspects in abundant cold-water diatoms were investigated using biogeographic (species presence and abundance), taxonomic (morphological and molecular data), and functional (experimental physiological and metabolomics data) tools. A compilation of multiannual phytoplankton species abundance data gathered during the spring bloom period from north-east Atlantic and Arctic waters (68-80oN) revealed high similarities in associations of the most abundant species. Spring associations were dominated by the diatom Chaetoceros socialis and the prymnesiophyte Phaeocystis pouchetii. A corresponding investigation of the winter period in this area could not identify associations of actively growing, autotrophic phytoplankton species. Change in species composition and abundance in time could not be assessed due to lack of consistency and regularity in sampling. A high-resolution time series of phytoplankton distribution is therefore needed in this area. A case study of the so-called cosmopolitan diatom C. socialis was performed using strains from north-east Atlantic/Arctic and from Mediterranean waters. By applying a phylo-phenetic species concept the two geographical populations were found to be pseudo-cryptic. They were genetically distinct, but only slight morphological differences were observed, in this case in resting spore morphology. Furthermore, when cultivated at 2.5, 8 and 13oC, the two groups of strains were functionally different in terms of growth rates (doublings day-1), photosynthetic efficiency (maximum quantum yield), and metabolic profiles. Our results do not support the assumed cosmopolitan distribution of C. socialis and therefore the present taxonomy of this species will need revision. A taxonomic update of the pseudo-cryptic diatom formerly known as Skeletonema costatum indicated that the species present in northern Norwegian and Barents Sea waters is identical to S. marinoi. Due to reports of high genetic, metabolic, and physiological diversity within this species, a functional approach would be valuable for understanding the ecology of S. marinoi in this area. Integrated approaches combining taxonomic and functional variables are recommended for future taxonomic work on phytoplankton species. Similarly, phytoplankton ecologists are urged to acknowledge the high degree of hidden taxonomic and functional diversity present in several phytoplankton species. Functional diversity studies are suggested to be a useful spot for integration and eventual modelling phenotypic, genotypic and ecological species data. Ultimately, such an approach should be beneficial also at the ecosystem level.