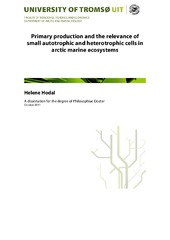 The Arctic is one of the least studied regions in the world and large changes in marine ecosystem dynamic are expected here because of the increasing air and ocean temperature. The central Arctic Ocean has for a long time been considered as a very low productive ecosystem, but recent estimates of primary production gives relatively high values. The shelves surrounding the Arctic Ocean are highly productive areas, especially the Barents Sea region, and a large part of arctic primary production occurs in these seasonally ice-covered regions. The relevance of small cells in arctic ecosystems has received increased attention the last two decades, and it is now accepted that the microbial food web play an important role also in the Arctic. To increase the knowledge on primary production and the relevance of small autotrophic and heterotrophic cells in the Arctic different field studies were conducted. Spring bloom dynamics (nutrients, phytoplankton, protozoans and in situ primary production) were investigated in Kongsfjorden (Svalbard) in April and May in 2002. During the multidisciplinary CABANERA-project three field campaigns in 2003-2005 to the marginal ice zone of the northern Barents Sea were conducted. Primary production was measured in situ for 24 hours at different stages of ice-edge blooms. Primary production and chlorophyll a measurements were fractionated in small (<10µm) and large cells (>10µm). During an expedition across the Arctic Ocean in August and September 2005 different biological parameters were measured (chlorophyll a, biogenic silica, particulate carbon and nitrogen, few zooplankton samples) together with the distribution of autotrophic and heterotrophic microbial biomass. Bacteria abundance was estimated using flow-cytometry and protists abundance was analyzed by epifluorescence microscopy after staining with DAPI. Protists were divided in different size categorize: < 2µm, 2-5µm, 5-10µm and 10-20µm. A seasonally study (January-September) of bacteria community structure and activity was conducted in a cold high latitude fjord (Balsfjord, northern Norway) in 2009 using fluorescence in situ hybridization (FISH) combined with microautoradiography (micro-FISH). In Kongsfjorden we found that the onset of the spring bloom was linked to the hydrographical situation during the sea ice break up. The peak of the spring bloom was found to vary between different years in both timing and intensity but will most probably occur between the middle-end of April and the middle of May. Primary production in 2002 persisted for a long time due to mixing with nutrient rich water masses. The ice edge phytoplankton bloom in the marginal ice zone of the northern Barents Sea was very heterogenic and no patterns in integrated primary production could be assigned to stages or latitudes. Subsurface (20-60m) primary production contributed with 24% to the total integrated primary production during ice edge blooms in the marginal ice zone, illustrating the importance of sampling in subsurface maxima. Small cells contributed with 46% to total primary production during ice edge blooms underlining the important role small cells can play as primary producers. Picoplankton (<2µm) abundance was high in the Arctic Ocean, and in the central part heterotrophic cells dominated (72%). Bacteria abundance was very low in the central part of the Arctic Ocean, but it is unknown whether this was caused by low growth rates or by high predation pressure. Bacteria were found to be highly active during summer in the Balsfjord underlining the important role they play in carbon turnover in the ocean. Bacteria belonging to Roseobacter were very active in assimilating DOM but they were not very abundant. This suggests that species specific predation may regulate the abundance of active bacteria. The main conclusion from the work included in this synthesis is that small cells are an important component of arctic food webs. Small cells need to be considered as important primary producers, also during spring blooms and ice edge blooms. We also found that bacteria need to be studied on single cell level to understand the underlying reasons for the dynamics that are observed on community levels.