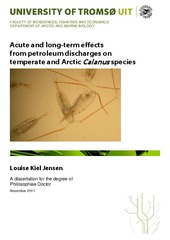 Summary Petroleum exploitation is emerging in the Arctic. In the Norwegian Arctic the southern Barents Sea is opened for development of oil and gas fields. This same area holds some of the world's largest and well managed commercial fish stocks such as Herring (Clupea harengus), Capelin (Mallotus villosus), Haddock (Melanogrammus aeglefinus), Atlantic Cod (Gadus morhua). For the interest of the fishing industry, as well as for maintaining a healthy ecosystem, petroleum related Environmental Risk Assessments (ERA) for the Barents Sea must be based on sound scientific knowledge of the special features of the Arctic ecosystem. In colder areas the physical behavior of oil is different compared to warmer areas. The lower temperature and lack of sun light during the Arctic winter slows down the natural physical weathering process of oil. In ERA in temperate areas the effects of exposure to the most volatile fraction of the oil are neglected due to short exposure time. However, in the Arctic the exposure to biota of this volatile fraction may be prolonged due to lower evaporation rates and the volatile fraction may be an important contributor to the overall adverse effect of an oil spill. Likewise, the exposure to the heavier oil fractions may be prolonged and knowledge on the long-term effects of exposure is essential. As an adaptation to the Arctic environment species found here have longer life spans, larger body sizes and higher lipid contents compared to temperate equivalent species. Thus Arctic species may accumulate contaminants over longer time and reach higher life time body levels. Meanwhile higher lipid content implies a higher affinity of lipophilic contaminants such as polycyclic aromatic hydrocarbons (PAHs). So, Arctic species may be exposed to oil compounds for a longer time because of the prolonged phycical presence and may, due to special adaptive features, be more efficient at accumulating oil contaminants. Today the knowledge of effects of oil contaminants on Arctic biota is limited, but growing. This thesis addresses a few of the research challenges in the field and provides knowledge on some effects of petroleum exposure to two copepod species; the sub-Arctic Calanus finmarchicus and the Arctic sibling species C. glacialis. First, Calanus was cultured for a generations under sub-Arctic conditions (Paper I). This work establishes that Calanus is suitable for ecological relevant long-term experiments. In an oil spill scenario, Arctic copepods and algae may be exposed to the more volatile fraction of the oil. Paper II provides data showing that the Arctic diatom species, Fragilariopsis oceanica, was the most sensitive species to exposure to the volatile hydrocarbon xylene. Further, the smaller, less lipid rich copepod species C. finmarchicus, was more sensitive compared to the true Arctic C. glacialis. Extrapolating these results to a spill situation, C. finmarchicus and C. glacialis populations would be affected by xylene exposure through both direct exposure (mortality) and indirectly through a decline in prey organisms (algae). Sub-lethal effects after long-term exposures to low concentrations of oil compounds may also be detected in C. finmarchicus and C. glacialis. Feeding was suppressed in C. finmarchicus after exposure to 7.0 µg PAHs l-1 for 11 days (Paper III). No significant effect on feeding was detected in C. glacialis exposed to 10.4 µg PAHs l-1 for 11 days. However, the hatching success of eggs laid by females exposed to 10.4 µg PAHs l-1 for two days was significantly reduced (Paper III). The long term effects of lipophilic PAHs in biota depend on the bioaccumulation capacity and internal concentrations of the various PAHs. Accumulation of lipophilic compounds is particularly important for the lipid rich Arctic species. Paper IV examines the uptake kinetics of two PAHs in C. finmarchicus and show that the accumulation of the lighter and less lipophilic compound, phenanthrene, is faster that the uptake of the heavier and more lipophilic benzo[a]pyrene (B[a]P). Equilibrium was reached for phenanthrene within 192 h exposure while no equilibrium was detected for B[a]P. The bioconcentration factor (BCF) was higher for B[a]P, reflecting the higher affinity for lipids of B[a]P compared to phenanthrene (Paper IV). So the heavier, more lipophilic PAH accumulates slower but to a higher concentration in C. finmarchicus. This thesis shows that not only acute but also long-term exposures may affect Arctic species. In addition, exposure duration may determine which compounds are accumulated by biota. Both indirect effects, such as decrease of food items, and direct effects, such as mortality, reduced feeding and reproduction failure may have implications for population development. These findings should be taken into consideration when developing ERA for the Barents Sea area.