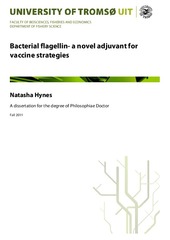 Flagellin is the principal structural protein in the locomotive organ flagellum present on flagellated bacteria, and is known to be an important evolutionarily conserved PAMP. Flagellin has been shown to bind to the PRR TLR5 which induces innate immune system responses and signaling pathways. In mammals, much focus has been placed on this protein in vaccine studies for its possible function as an adjuvant. Flagellin (FlaD from Vibrio anguillarum) was recombinantly produced in two forms, full-length (FDL) and a truncated form (FDS) with portions of the N- and C-termini removed to prevent polymerization. Both forms of flagellin were tested alone and in combination with an antigen in a dose response study to determine the most effective dosage to produce a strong immune response. A polyclonal antibody for FDS was produced and showed good specificity in immunoblot testing. Cell culture was used to compare the NF-κB response after stimulation with FDL versus FDS and resulted in a significantly larger response in cells stimulated with FDL. QPCR mRNA gene expression results showed a strong innate immune response with a number of genes known to be induced downstream by the TLR signaling pathway up- regulated including important TLR5S and inflammatory cytokines and chemokines (TNFα, IL-6, IL-8, IL-1β). Microarray analysis of salmon injected with flagellin caused reproducible gene up-regulation of inflammatory cytokines, chemokines and receptors (IL-8, TNFRSF11B, IL-1R), antimicrobial peptides (hepcidin, cathelicidin), immune genes (C/EBP, thioredoxin, C-type lectin receptor B), complement genes (complement component C7 and C7-1), peptidases (MMP-9) and genes involved in the Ras/MAPK pathway (Ras-related proteins). Down-regulation of interesting immune genes also occurred including myxovirus resistance 1, clusterin-1 and LPS-induced TNF-α homolog. Some genes exhibited early, delayed or extended response over the sampling time and flagellin seemed to be the key component to eliciting a response. Flagellin was shown to induce innate immune responses in Atlantic salmon.