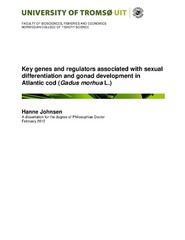 Atlantic cod (Gadus morhua L.) is a promising cold-water aquaculture species, but early sexual maturation is a major problem in today’s cod farming. Teleosts display a wide variety of sex determination and sex differentiation mechanisms, ranging from genetic to environmental factors and the sexual plasticity in gonads and brain possibly reflects on a combination of these. From a practical point of view it is crucial to identify the essential biological mechanisms to develop new methods of controlling fish reproduction in aquaculture. In this thesis, several approaches were taken in order to gain basic knowledge of factors involved in sexual differentiation and gonad development in Atlantic cod. The Doublesex and mab-3 related transcription factor 1 (Dmrt1) which is involved in testis development in a wide variety of vertebrates was characterised. The dmrt gene family consists of four additional genes in cod. In order to further clarify the evolution of the dmrt gene family members in fish, the chromosomal synteny of dmrt flanking genes in different chordate lineages was examined. A novel understanding of the gene duplications of dmrts was presented as the duplicated dmrt2a and dmrt2b were probably not a result of the fish specific whole-genome duplication. Gene expression analyses during early life and the reproductive season was conducted for a selection of genes known to be involved in sexual differentiation and gonad development. The examined genes included all five dmrts, two sox9 (SRY-related high mobility group (HMG) containing box gene 9) paralogs and two cyp19a1 (cytochrome P450, family 19, subfamily A, polypeptide 1) paralogs in addition to a single anti-Müllerian hormone (amh) gene. Altogether, the different expression patterns of the examined genes in Atlantic cod embryos, larvae and adults suggest distinct functions for all the genes examined. The findings indicated that Cyp19a1a may be an important factor in female development while it was clearly demonstrated that Dmrt1 has an important role in male development of cod.