Calanus glacialis : the role of lipids in the life cycle and for the Arctic pelagic food web 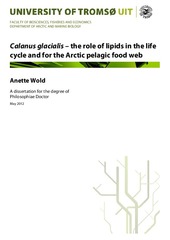 The Arctic marine ecosystem is characterized by strong seasonality and a short but productive period of primary production in the spring when the ice breaks up. Calanus glacialis is one of the key links between primary producers and higher trophic levels, and it is adapted to the strong seasonality by life cycle traits such as; seasonal vertical migration, diapausing, reproduction in the spring and extensive energy storage. The timing of these events will have consequences for the success of C. glacialis and also for the energy available at higher trophic levels. The aim of this study was to increase the knowledge about these key life history traits with focus on the role of lipid accumulation, seasonal vertical migration and the transfer of energy from primary producers through Calanus, to higher trophic levels, such as seabirds and seals. Lipid accumulation and seasonal vertical migration of C. glacialis were studied in the Amundsen Gulf, in the Canadian Arctic (Paper I) and in Svalbard waters (Paper II and III). The transfer of energy to higher trophic levels was studied by comparing the fatty acid composition of predators to that of their prey and by using stable isotope analysis to calculate their trophic level. We analyzed five seabird species from Kongsfjorden; Little auk (Alle alle), Brünnich’s guillemot (Uria lomvia), Black-legged kittiwake (Rissa tridactyla), Northern fulmar (Fulmarus glacialis) and Glaucous gull (Larus hyperboreus) (Paper IV) as well as harp seals (Phoca groenlandica) and hooded seals (Cystophora cristata) from the West Ice (Paper V). The timing of the ascent of C. glacialis during spring, the match of reproduction with the primary production as well as the length of the primary production period determines the development of offspring , the overwintering stage the following winter, and hence the length of the life cycle. The shorter the period of primary production, the more important is the match between reproduction and bloom. Ice algae may fuel early maturation of the females and prolong the reproductive period. In the Amundsen Gulf, C. glacialis ascended to the surface water in time to feed on the ice algae bloom, but since CIII was the main overwintering stage, the ice algae fuelled development of CIII which could develop to females that possibly could spawn during the summer. The life history trait of accumulating energy in form of lipids is an adaptation of Calanus to the large seasonal and inter-annual fluctuations in food availability, and the lipids represent an effective transfer of energy up the food chain. High levels of the Calanus markers 20:1n9 and 22:1n11 in the seabirds Little auk, Black-legged kittiwake and Northern fulmar from Kongsfjorden, Svalbard, indicate that these seabirds are part of the Calanus based food web (Paper IV). Harp seals and hooded seals (Paper V) showed considerably overlap in diet, but the fatty acid composition of harp seals originated from a diatom–Calanus based food web, while the fatty acids of hooded seals originated from a food web based on dinoflagellates and the prymnosiophyte Phaeocystis pouchetii. To conclude, the diatom–Calanus food chain is an important driver for the high latitude pelagic arctic food web. The match between timing of primary production, either as ice algae or phytoplankton bloom, and the timing of reproduction of C. glacialis is crucial for the accumulation of lipids in Calanus may have consequences for the energy available for higher trophic levels.