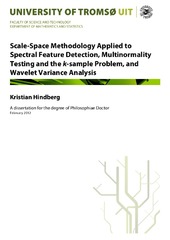 The number of scale-space statistical algorithms has been greatly increased over the last 15 years. The concept originated from computer vision, introduced in Lindeberg (1994). The seminal paper by Chaudhuri and Marron (1999) brought the scale-space concept into smoothing of curves and kernel density estimation through the SiZer tool. By using all relevant smoothing bandwidths, i.e., the scale part, SiZer allows the user to look for interesting features in the smoothed curves or density estimates simultaneously on all bandwidths. In the years following, a number of classical statistical problems were also included in the family of scale-space algorithms. In this thesis, new scale-space algorithms for four such classical statistical problems are suggested. Paper II presents two closely related problems, addressed with highly similar approaches. Paper I addresses spectral scale-space analysis. Peaks found in the estimated spectral density function of evenly sampled stationary signals are typically of great interest for scientists. A peak found at a given frequency translates to potential (hidden) periodicities in a data set. Therefore, algorithms to determine which spectral peaks that really are significant are important in real-world applications. The presented algorithm uses the infamous periodogram, for reasons explained later. The different Fourier frequencies are the space part of the algorithm, while the scale part is introduced through a smoothing parameter of an assumed prior distribution. By using the Integrated Nested Laplace Approximation, a full posterior distribution can be constructed, from which the needed p-values are found. Unlike Papers I and III, Paper II presents a scale-space approach without introducing a prior distribution. Through two similar algorithms, two different questions are addressed: 1) Can a multivariate data set be considered to originate from some unspecified multivariate Gaussian distribution? 2) Can k multivariate data sets be considered to originate from some unspecified multivariate distribution? The scale part of both algorithms is connected to a weighted summation across neighboring dimensions. The number of dimensions that are summed across is given by the scale parameter. The space parameter is connected to the time or location index of the data series. The algorithms do not need to invert estimated covariance matrices, thereby they can handle the High Dimension Low Sample Size case, where most comparable methods fail. Paper III brings the scale-space concept into long-range dependence and wavelet analysis. The basis of this third paper is the wavelet coefficients resulting from linear filtering of the data with localized wavelet filters of increasing widths. The variance of these coefficients forms the wavelet variance. The space part is connected to the different wavelet filters/scales. As in Paper I, the scale part is connected to the smoothing parameter of the prior distribution. The degree of long-range dependence is fully characterized by the Hurst parameter. This parameter can be estimated through linear regression of the natural logarithm of the wavelet variance. Determining for which scales this regression should be done is not trivial, an issue which the presented algorithm addresses. A time-divided/local wavelet analysis for detecting non-stationarities in the data is also presented in Paper III.