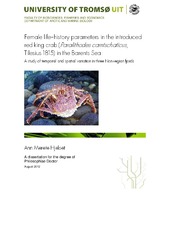 The red king crab (Paralithodes camtschaticus) was deliberately introduced to the Barents Sea by Russian scientists during the 1960s, with the purpose to improve coastal fishery and thus improve the local economy. Since the red king crab was caught for the first time in the Varangerfjorden area, the stock has increased in abundance and expanded westward inhabiting coastal areas along the coast of Finnmark from the Russian border in east to the area around Hammerfest in west. Today the population of red king crab supports a valuable fishery in the Barents Sea, representing an ex-vessel value of 150 million NOK in 2011. Several challenges are related to management of the red king crab, since it is an introduced species. The Norwegian management regime today has two goals, one is to keep a long term harvest within a geographical limited area and the second is to limit further spread of the crab. Basic knowledge is needed to meet both objectives, particularly knowledge on life-history traits. The main study area in this thesis has been three large fjords in Finnmark in northern Norway. There is a historical westward spread of the crab along the Norwegian coast, and it has been present in Varangerfjorden, Tanafjorden and Laksefjorden for about 35, 25 and 15 years respectively. Crabs have been sampled annually during scientific autumn cruises from 1994 until 2011. Size at maturity is a key life-history parameter in fishery management and should be monitored routinely. For female red king crabs this means the recording of presence or absence of eggs. In paper I the size at maturity was estimated in female crabs from each of the three fjords which constitute the main study area in this thesis. No temporal differences were seen and the size at maturity varied from 108 to 111 mm carapace length in the three fjords and was found to be generally higher than in native areas. Knowledge about the species individual fecundity gives information on size and number of offspring produced. Fecundity is closely related to life-history traits such as size at maturity, life-span and egg size. In this study both spatial and temporal patterns in fecundity and a reduction in individual egg weight was found. A main finding in paper II was a reduction in the individual fecundity during a part of the study period. An average female produced about 30 % less eggs in 2007 compared to 2002. Fecundity is the life-history parameters that respond most rapidly to changes in environment or other factors, such as fishery. The abundance estimates of red king crab females have increased in our area during the study period, but in the last two years, a decrease was observed in Tanafjorden and Laksefjorden. The stock size composition and the individual fecundity parameters established in paper II has been used in paper III to obtain a reproductive potential of the crab stock for the period 1995 to 2011. The male-only fishery and introduction of a female quota has had influence on the size composition and fecundity, and thus on the potential egg production in the stock. The study also showed that an observed reduction in size of large males was correlated to a size reduction of large females with a one year lag.