Characterization of a Cytokinin Response Factor in Arabidopsis thaliana 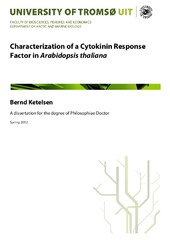 Acclimation responses to environmental growth conditions in plants involve complex and fine-tuned signalling networks. Environmental signals, biotic and abiotic, are received and mediated, and lead eventually to transcriptional regulation. The plant hormones are vastly involved in these processes as intercellular mediators whereas the reception of such a hormone at the site of action involves intracellular protein signalling cascades. This thesis investigates the function of the transcription factor CRF5 of Arabidopsis thaliana which was so far known to be integrated in the course of cytokinin signalling and cotyledon development. AtCRF5 belongs to the ERF subfamily of the AP2/EREBP transcription family and is accordingly carrying an AP2 DNA binding domain which was shown to enable members of this family to bind to the cis-regulatory elements Ethylene Responsive Element (ERE) and the Drought Responsive Element (DRE). By yeast transactivation assays it was possible to show that AtCRF5 acts not only as an activator of transcription but also that the responsible transactivation domain is located among the 98 final amino acids. A detailed sequence analysis of this so far uncharacterized region and a phylogenetic analysis revealed two conserved sites which could be found throughout the plant kingdom. These sites group the CRF subfamily into four clusters of which only three can be found in Arabidopsis. Promoter interaction studies revealed that AtCRF5 is able to interact with the cis-regulatory DRE element of RD29A and to induce gene expression. The regulation of gene expression of components of the cytokinin signalling pathway could be confirmed by expression analysis of transgenic Arabidopsis lines although it could not be proven if this is a direct or indirect effect. Also the crosstalk between cytokinins and other hormones might be facilitated through AtCRF5. Phenotypic studies on transgenic Arabidopsis seedling constitutively overexpressing AtCRF5 showed pleiotropic effects like shorter roots, smaller shoots, and fewer chloroplasts per cell as well as a hexose/sucrose ratio shift towards the hexoses. Surprisingly, the shoot and the root phenotype could be reversed by adding sucrose to the growth medium pointing towards an effect of AtCRF5 on sugar metabolism. Summarized, it could be shown in this thesis that AtCRF5, as a component of the cytokinin signalling pathway, is able to connect this pathway with the regulatory action of AP2/EREBP transcription factors. AtCRF5 is involved in hormonal crosstalk and sugar metabolism in Arabidopsis thaliana.