Synthesis of a novel class of antitubercular peptidomimetics based on β-aminoboronates. 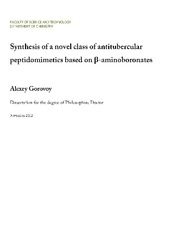 The unique properties of antimicrobial peptides have attracted the attention of chemists since the 1970’s. This class of compounds provides additional tools in the treatment of infections and the work described in this thesis was therefore focused on the synthesis of short peptidomimetics on the basis of modified amino acids and evaluation of their antimicrobial activity. The compounds of choice were β-aminoboronic acid derivatives with different substitution patterns and this work describes the development of a synthetic approach to the synthesis of this class of compounds. The skeleton of a β-amino acid was built using a step-wise approach utilizing the Matteson homologation. New chiral centers were obtained with high levels of diastereoselectivity provided by the use of chiral directors with particular configurations. The variety of β-aminoboronates was provided not only by different substituents in positions α- and β- to boron, but also by the opposite configurations of these chiral centers. As their configuration was dependent on the chiral directors used, several attempts to obtain all possible stereoisomers were undertaken. Derivatives of β-aminoboronic acid were coupled with different amino acids (both natural and non-natural) and the library of (~70) short peptidoids was characterized and tested on the set of microorganisms (Mycobacterium tuberculosis, Staphylococcus aureus, Escherichia coli, Streptococcus pyogenes, Pseudomonas aeruginosa and Candida albicans). High activity of the synthesized compounds against Mycobacterium tuberculosis (H37Rv) induced additional investigations on a set of resistant strains of this pathogen. Lead compounds has shown activity against all resistant strains tested. Investigation of the affinity of our compounds to secreted and internal chorismate mutase showed the absence of binding and led to the exlusion of this mechanism of inhibition from consideration. Antifungal activity (including resistant strains) was detected in one of the molecules synthesized. The low levels of toxicity of the lead compounds are very encouraging with regard to the prospects for developing drugs based on these compounds.