Vole population cycles and the role of colonisation 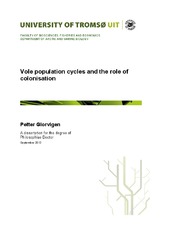 The multiannual population cycles in small rodents have triggered an intense debate between proponents of population-intrinsic and community-extrinsic factors as the cycle generating mechanisms. A well-known challenge is the apparent absence of vole individuals during the low phase of the population cycle and the fact that most studies addressing vole and lemming behaviour and demography are conducted at high to moderate population densities. Overall this thesis aim to (1) present new insight for the least studied phase(s)of the vole population cycles: specifically the role of colonisation processes in the transition from small isolated populations in the low-phase to the spatially extensively distributed populations in the peak phase of the cycle, and (2) provide an updated view on how population-intrinsic and community-extrinsic processes may interact during the vole population cycles. The first experiment documented that colonisation is a beneficial strategy in female bank voles (Myodes glareolus) compared to immigration. The second experiment demonstrated that the first born cohort of root voles (Microtus oeconomus) emigrating in early summer have large capacity for colonising spatially scattered habitat patches – a capacity that explains the fast recolonistation of empty habitat space following crashes in cyclic populations. These experimental results also gave evidence for presence of social fences around high quality habitats at low population density. Hence, in the increase phase voles seem to actively search for vacant habitats and settle in them conditional on habitat quality and population density. An observational study of a riparian mainland-island root vole metapopulation confirmed that such patchy populations with cyclic dynamics may be subject to extensive occupancy dynamics. However, owing to high capacities for dispersal and habitat tracking, voles rapidly colonised the high quality islands across the entire metapopulation landscape that previously had gone extinct due to demographic (small population size) and environmental (high water levels) stochasticity. In total, the experimental and observational studies show that spatially scattered (sub)populations that have survived the crash phase are able to provide colonists to remote habitat patches embedded in hostile matrix and thus pave the way to a new increase and peak phase. The updated view on the causes of population cycles in voles emphasises the important role of dispersal (colonisation) and sociality in all phases of the cycle. It is not claimed that intrinsic mechanisms, either alone or in interactions with extrinsic factors, are necessary for generating multiannual cycles. Rather that the interaction between extrinsic and intrinsic factors likely contribute to shape rodent population dynamics, and that different innate propensities for sociality and dispersal among different rodent species may be related to interspecific variation in topology of the cycles (i.e. cycle shape and amplitude) and degree of spatial population synchrony.