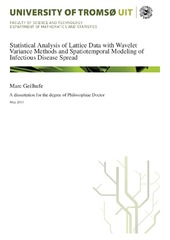 The focus of this thesis is the analysis of both regular and irregular lattice data, described in three papers. Paper I presents an extension of the pyramid algorithm for efficient Maximal Overlap Discrete Wavelet Transform coefficient calculation. As opposed to common usage of two-dimensional wavelet decomposition, it here also allows for different scales in the vertical and horizontal direction. Wavelet variances are investigated for scale-dependent analysis of spatial patterns. A practical geoscience application with Synthetic Aperture Radar images of sea ice illustrates its potential. In Paper II wavelet variances are used to develop a novel test for isotropy of random fields. Isotropy is frequently assumed in spatial modeling. It requires the covariance or variogram function of a stationary or intrinsically stationary spatial process to depend only on the distance between two locations, independent of direction. In a simulation study, the presented test for isotropy is applied to realizations of various isotropic and anisotropic Gaussian random fields. Its performance is superior compared to existing methods, both on the general applicability and the consistent rejection rate close to the nominal level for isotropic fields, while the power for anisotropic fields is comparable to or better than other methods. An example connected to the manufacturing of paper also demonstrates practical applicability of the wavelet-based isotropy test. In Paper III microbiology test results of influenza A disease counts in North Norway are modeled to study the pattern of disease spread. The focus is to link the disease incidence to movement networks, with human travel patterns described by actual traffic data or a power law approach. Models with fixed, seasonal and random effects are used and extended with various covariates. An additional analysis is performed by grouping the data into adults and non-adults. All models are compared by one-step-ahead predictions using proper scoring rules.