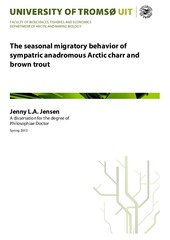 This thesis used acoustic and archival telemetry to study fish migrations within and between freshwater and marine habitats. The main novel finding from this thesis work is that both Arctic charr and brown trout originating from rivers without access to lakes can be found in marine waters also during winter. The physical properties of the freshwater habitat may be the main factor controlling in which habitat fish reside during the winter. The fish that left the river during winter were mainly recorded in the estuary, but also in the sea up to 20 km away from the river outlet. There was large individual variation in migratory behavior, and individual fish were documented to reside in pure marine waters for periods lasting from a few hours to several months. The summer migratory behavior study of Arctic charr and brown trout showed that the species segregated in horizontal area use, where Arctic charr preferred colder coastal areas than brown trout. If the migratory behavior is controlled by temperature, it may be strongly influenced in a potential global climate warming scenario. The thesis also showed that migratory fish may have spread the Atlantic salmon parasite Gyrodactylus salaris between watercourses, and that the harvest rates may be proportionally much higher for Arctic charr than brown trout.