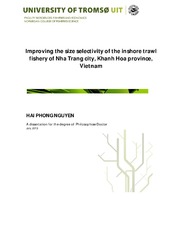 Trawling is an important fishing method used by the inshore fishermen of Nha Trang city, Khanh Hoa province, Vietnam. The inshore trawl fishery in Nha Trang city is known to have very low selectivity, which may not be a responsible fishing practice. The trawl nets of the fishery retain large numbers of juvenile individuals, which has negative effects on the marine resources. The goal of this thesis is to provide initial suggestions to improve the selectivity of the inshore trawl fishery of Nha Trang city in order to reduce the catch of trash fish and juveniles of economically important species. To fulfil this goal, I performed the following steps: (1) studied the current status of juvenile and trash fish caught by the fishery in order to gather information on the composition and sizes of untargeted species ; (2) studied the selectivity of conventional codends with different diamond mesh sizes and with a square mesh panel; (3) aimed to determine the willingness of fishermen to use a bycatch reduction device (BRD) to reduce the catch of juvenile individuals. The status of juvenile specimens caught by the fishery was determined by: (1) direct access to trash fish samples from the trawlers of the fishery; and (2) catch notes made by the wives of fishermen who were responsible for selling the catch at landing points. The selectivity of the codends tested was studied during sea trials on chartered trawlers from the fishery where the cover codend method was used. I also interviewed the captains of the trawlers to collect information about their willingness to test future versions of a BRD. We found that trash fish accounted for reasonable part of the catch by trawlers from the fishery and played an important role in the incomes of fishermen, especially fishermen from small trawler fleets (i.e., trawlers with an engine power of less than 33 Hp). The trash fish comprised several economically important species (i.e., Cephalopoda spp., Portunidae spp., Penaeidae spp., Trichiurus lepturus, Saurida tumbil, and Epinephelus spp.). Most of the economically important species in the trash fish category measured less than 13 cm in total length (TL), except for Trichiurus lepturus where TL could reach 15 cm. This project also showed that the current mesh size of the diamond mesh at the codend had very poor selectivity performance. An increase in the mesh sizes used by the fishery to the legal mesh size would help to increase the selectivity for lizardfish, shrimp, squid, and threadfin bream. In addition, increasing the current codend mesh size to match the legal mesh size would help to reduce the catch of trash fish significantly. However, the legal mesh size is not sufficient to totally protect juveniles caught by the gears. With the current situation, the legal mesh size would be accepted to compromise between the protection of juveniles and the economic loss of fishermen. In the future, mesh sizes which is larger than current legal mesh sizes are suggested. The square mesh panel also helped to reduce the catch of trash fish and increased the selectivity for squid and lizardfish. Fishermen from the small trawler fleet refused to use the BRD to release the juvenile individuals. Fishermen from the larger trawler fleets may use the BRD provided there is no reduction in their catch of small squid. Information learnt from interviews with fishermen showed that the fish stocks exploited by the studied trawl fishery are declining sharply and it is necessary to deliver suitable measures to protect the fish stocks. Improving selectivity of the trawls used in the fishery is one of the measures.